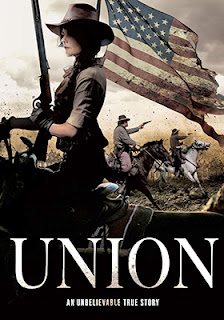 Indican Pictures announced this past week that writer/director Whitney Hamilton’s Civil War saga, Union, will be heading to the DVD marketplace on Oct. 15.

Hamilton’s Union, the result of years of painstaking research, opened at the Birmingham, Alabama Sidewalk Film Festival in August of 2018 (no surprise, the bulk of the filming was in around the Birmingham area) and then worked the festival circuit for a full year before getting a four-theatre showcase run by Indican Pictures in early August of this year.
For the record, the ARR works out to 74 days. 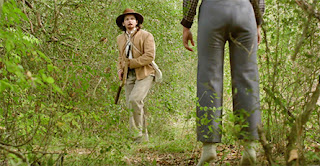 During the Civil War there were over 400 documented stories about women serving as soldiers in both the Union and Confederate armies.   This is the story of one of those combatants, Grace Kieler, whose brother Henry was killed and whom she replaced as a rider with Mosby’s Rangers.   She, like others like her, were able to avoid detection, but once wounded and on the operating table the jig was up … but being discovered was only half of her problems.

She, acting as her brother, also agreed to help a widow in the aftermath of the Civil War, save her farm.  That required a sham marriage.    And, if that wasn’t enough, Henry/Grace Kieler also made a solemn vow to find a young boy named Harrison Walker, whose mother was killed in a Union raid on a Confederate encampment … he became an orphan and was lost. 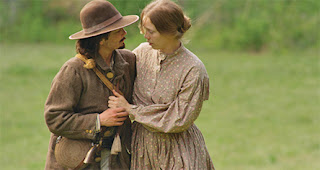 Soldier, husband … and “detective” in search of a missing boy in the aftermath of the Civil War, that’s quite the adventure for a young woman in the 1860s!!!

In other release news from Indican Pictures this past week, the Frightfest 2018 surprise, writer/director Kevin Chicken’s (my gosh, is that his real name?) Perfect Skin, will be available on DVD on Oct. 22. 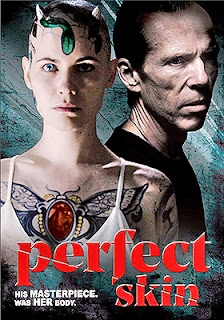 London, an American abroad, a beautiful and naïve Polish woman, sounds like the makings of a lovely romance.   Romance, sure, if you like your romantic encounters dark and sinister with a touch of torture.

Bob (Richard Brake — as “The Night King” on Game of Thrones, plus such films as 3 From Hell, Hannibal Rising, Doom, Water for Elephants, etc.) is a tattoo artist who now lives in London.   He enjoys his work — no, make that he loves his “career” as a tattoo artist, it is his passion; his life.   But our “artist” has a bit of bad news that changes everything … imagine a tattoo artist with Parkinson's!

Into his circle comes the lovely Katia (Natalia Kostrzewa — The Shadows, The Cured), from Poland, living with her roommate Lucy (Jo Woodcock), and it is love at first sight.   It’s not the “love at first sight” that you might be thinking, but the love of her perfect body and moreover, her perfect complexion; skin.

What he could do to her.   It becomes an obsession.   It could be his last chance to take his “art” to a new level before the disease robs him of his skills.   And so, when Lucy goes off to tend her sick mom, Bob does what any great artist would do, he kidnaps Katia and locks her away in a cell — complete with bars — below his “Perfect Skin” studio and then has at her … inch by inch.

Perfect Skin, from first time filmmaker Kevin Chicken (really, Chicken?), is a total creep-out.   A horror film to be sure, but with ink, instead of blood, and yet every bit as terrifying as any serial-killer tale that you might imagine!!   Oct. 22, Perfect Skin on DVD … just in time for a home viewing Halloween scarefest!! 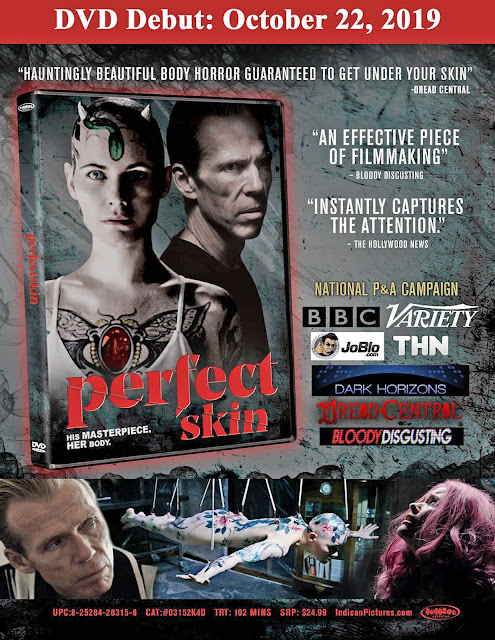