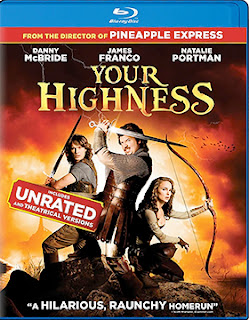 For game-players; cos-play dreamers and those inspired to dig deep into medieval personas — slay the dragon and all that — Green’s Your Highness is all that, and more (“cutting edge,” if you get the drift).

Danny McBride (Pineapple Express, Tropic Thunder, Up in the Air, etc.) is Prince Thadeous and James Franco (127 Hours, Pineapple Express, Child of God) plays his brother, Prince Fabious … their father is King Tallious (Charles Dance) and they reign in the Kingdom of Mourne.

It is here that they constantly have to fight off the evil wizard Leezar (Justin Theroux — American Psycho, Mulholland Drive, Zoolander, etc.), who has a scheme cooked up to take over once and for all (or is that forever and ever).  It involves a warlock and a virgin and two moons (two moons, really?).

Leezar has his virgin, Belladonna (Zooey Deschanel — Elf, Almost Famous), who is betrothed to Fabious and so off the brothers go — along with their servant “Courtney” (played by voice talent Rasmus Hardiker) — to rescue her and save their kingdom.   While on their quest, they meet up with Isabel (Natalie Portman — Oscar-winner for the Black Swan … and, of course, as Padmé in the Star Wars movies), who gets them out of a jam, and they then join forces in their quest to vanquish Leezar, free Belladonna and save the kingdom.   Whew.

If you were looking for Knights of the Round Table (with Robert Taylor and Ava Gardner) or The Black Shield of Falworth (with Tony Curtis and Janet Leigh), then you have wandered into the wrong arena.   Green’s Your Highness is more akin to the adventures of the knights and their romp in Monty Python and the Holy Grail, mixed in with plenty of rowdy humor and double-entre jokes … and that all works wonderfully well.   Great special effects too.

Bonus nuggets include both the unrated and theatrical (R-rated) cuts of the movie, plus there is commentary with director David Gordon Green (Pineapple Express, The Sitter, the 2018 Halloween reboot, with Halloween Kills due out next year), who is joined by cast members Danny McBride, James Franco and Justin Therous.  Additionally, there are deleted scenes, a gag reel, alternate scenes and the featurette titled “The Making of Your Highness.” 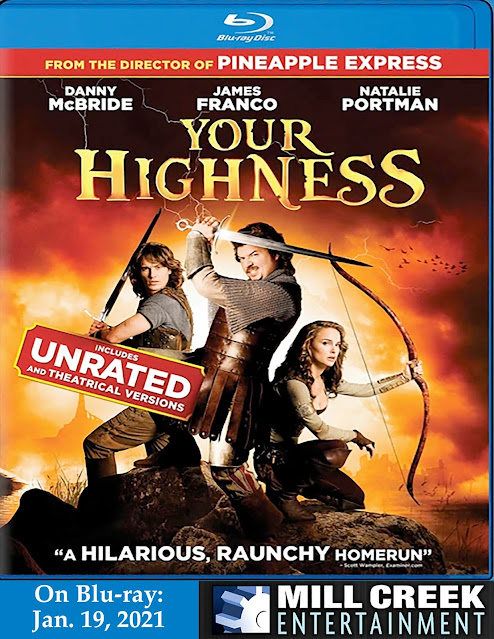 Email ThisBlogThis!Share to TwitterShare to FacebookShare to Pinterest
Labels: Director David Gordon Green's Your Highness On Blu-ray From Mill Creek Entertainment On Jan. 19