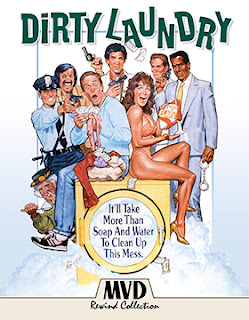 This would be the Blu-ray debut of writer/director William Webb’s ultra-rare 1986 caper comedy, Dirty Laundry, starring veteran soap opera and television series star Leigh McCloskey (in one of his occasional film roles … Santa Barbara, Dallas, General Hospital, The Young and the Restless, etc.) and Jeanne O’Brien in her film debut, plus recording legends Sonny Bono and Frankie Valli as Los Angeles mobsters.

It’s a comedy of errors in the City of Angels as a routine trip to the Laundromat by Jay (McCloskey) goes wildly off the rails when a drug deal involving halfwits and old ladies goes south.   Jay was just trying to get his clothes clean, but during the mayhem he ends taking his dirty laundry back home — for another try later on — only to discover that he’s now holding a bag with a million dollars in cash.

Naturally, mobster “Macho” Marty Benedictine (Frankie Valli) wants his money back and tasks the inept Vito (Nicholas Worth — Swamp Thing, High School High, Doin’ Time, etc.) to track the kid from the laundry down.   The FBI is also on the case … it’s going to get wild on streets of Los Angeles. 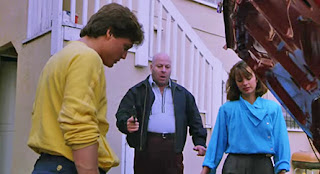 Dirty Laundry is fun for the vintage tour of Los Angeles and the “faces” that pop up in small parts … get your check list ready to spot the likes of Olympians Greg Louganis and Carl Lewis, plus Jill Terashita (Night of the Demons, Sleepaway Camp III: Teenage Wasteland), John Moschitta Jr. (the voice of Blurr in The Transformers movies), roller derby star Dee “Queen Kong” Booher, Matt Sorum (Guns and Roses), Terry Nails from Ozzy Osbourne’s “No More Tears” album, and both Johnny Frank and Danny Star from the rock group Kingdom Come. 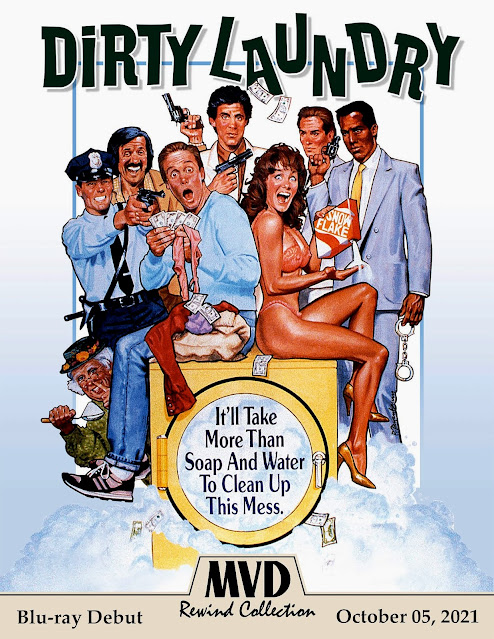