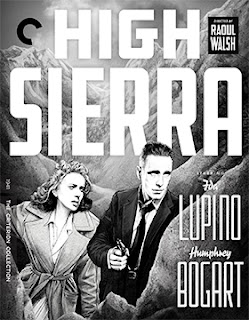 The Criterion Collection has an exciting October lineup of new film restorations that will be making their way to movie buffs as both DVD and Blu-ray product offerings during the course of the month.

There’s no better place to start than with director Raoul Walsh’s double-bill on Blu-ray (two disc set) and DVD (a three-disc configuration), which streets on Oct. 12.   Topping the action is a new 4K film restoration of Walsh’s January of 1941 film adaptation of W. R. Burnett's novel, High Sierra, starring Ida Lupino and “B-movie” gangster veteran Humphrey Bogart as Roy "Mad Dog" Earle … after this, Bogart was a star with top-billing (it only took ten years and 38 previous film roles to get there).

But even getting the role was a struggle for him to land as George Raft, Paul Muni, James Cagney and Edward G. Robinson were all considered for the part, but without Bogart here, it might have been just another crime drama. 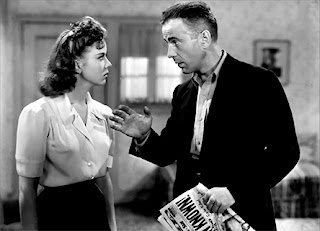 Another terrific release — especially for genre fans — from the Criterion Collection during the month of October takes place on Oct. 19 with the arrival of Blu-ray and double-disc DVD editions of director Jack Arnold’s 1957 atomic-age sci-fi thriller, The Incredible Shrinking Man.

This is a new 4K film restoration. 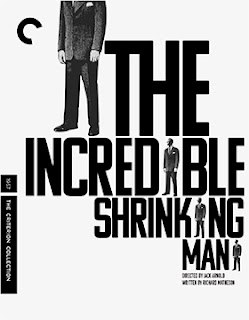 Tarantulas have a relatively short life-span, but “Tamara” got two starring credits in her short film career.   Here, as the normal-sized menace of the once-normal guy by the name of Robert Scott Carey (Grant Williams — The Monolith Monsters, The Leech Woman), and as the featured creature in another Jack Arnold classic, the Thanksgiving of 1955 theatrical release of the sci-fi treasure, Tarantula.

In The Incredible Shrinking Man, we have Carey out on a routine boating trip one afternoon with his wife Louise (Randy Short — I Was a Male War Bride, Man from God's Country).  While she is below deck, their boat passes through a strange mist and he ends up being covered with a powder-like substance … he thinks nothing of it.

Time passes and he begins to notice that his clothes are not fitting right.   He is literally shrinking, getting smaller each day.   Doctors deduce that his exposure on the boat was somehow related to radiation and begin work on an experimental serum to stop the process, but sadly, cannot reverse it.

The effect is only halted for a while and then Carey begins getting smaller once again.   He is attacked by the family cat and Louise assumes the worst.   Alone in the basement, the third act features one of the great man-versus-creature battles of all time as the inch-sized Carey is pitted against a deadly spider in a fight for his life! 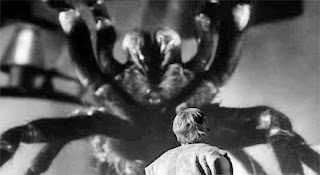 Email ThisBlogThis!Share to TwitterShare to FacebookShare to Pinterest
Labels: The Criterion Collection Announces Its October Of 2021 Slate Of Films Restorations Heading To Blu-ray And DVD