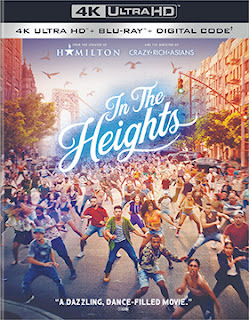 The ARR comes in at 81 days and domestic box office receipts from the film’s mid-June theatrical launch currently stand at $28.3 million.

In a normal summer-season theatrical run, In the Heights would have had a significantly higher box office number, but the studio’s continuing use of day/date HBO Max rollouts cut into that potential.   With a reported production budget of $55 million, it becomes a “new math” problem as to whether this strategy makes sense in a post-Covid marketplace.   Time will tell.

Planned for release are a 4K Ultra HD/Blu-ray Combo Pack, plus stand-alone DVD and Blu-ray editions.

Anthony Ramos (Honest Thief, Godzilla: King of the Monsters, A Star is Born) and Melissa Barrera (popular star of several Mexican telenovelas) star in this joyous musical celebration of the life and culture of New York City’s Washington Heights.

Bonus features, which are limited to the Blu-ray and 4K Ultra HD SKUs, include a sing-along mode and seven music videos.