Icarus Films will be teaming up with France’s premiere film production and distribution company, Distrib Films, on Sept. 28 for the domestic DVD debut of documentary filmmakers Thierry Demaizière and Alban Teurlai’s Lourdes.

This is an insightful and heartfelt look at the second most popular tourist destination in France after the City of Lights, Paris.   But more, it is also about about the people who make pilgrimages there in hope of miracles.

Hollywood has made movies about the events of 1858, where a teenage girl by the name of Bernadette had visions of the Virgin Mary.   Jennifer Jones won the Oscar for Best Actress for her portrayal of the young woman and the events that took place in the Best Picture-nominated film, The Song of Bernadette.

Between the folklore, the Catholic Church and the movie, Lourdes has gone from a small village to a prime destination, especially for those who are looking for miracles of their own.

The approach that Demaizière and Teurlai’ take in their documentary is that of following individuals on their pilgrimage to Lourdes.   These are either people that are very ill, or ones that have some special need, or the people helping them in their quest.   This makes for an intimate look at why so many make the trip to Lourdes as they seek out the water that flows there.  A place that has such special meaning.

And, it is not random.   The filmmakers begin with the participants before they leave, which gives us a bit of background and makes what follows much more meaningful.  It is very touching … believe, not believe, you will be moved by the experience.

Lourdes is presented in French with English subtitles. 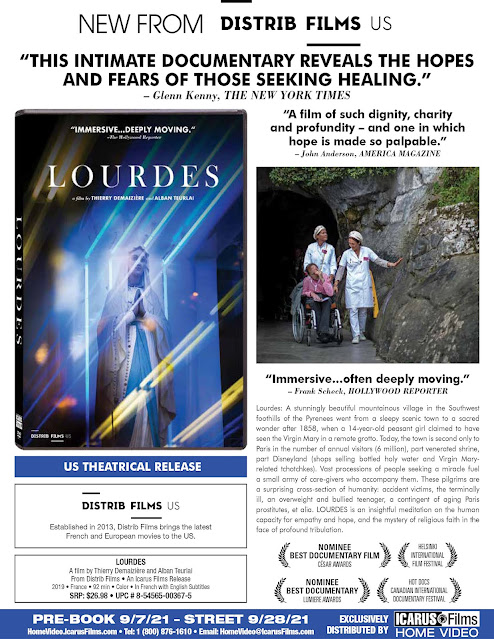 Email ThisBlogThis!Share to TwitterShare to FacebookShare to Pinterest
Labels: Icarus Films Sets The Domestic DVD Debut Of Lourdes For Sept. 28