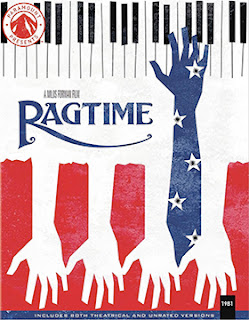 Paramount Home Entertainment has set the street date for its next “Paramount Presents” Blu-ray release … and it is a stunner.

This is a new 4K film restoration of, not only the theatrical cut, but of the newly discovered “Director’s Cut” (from an unearthed workprint), which features approximately 20 additional minutes (ordered cut by producer Dino De Laurentiis).   This meant the complete deletion of the Emma Goldman character played by Mariclare Costello (Let's Scare Jessica to Death, Ordinary People) from the film.

Forman, speaking about the film, actually opined that the shorter version seemed longer because of the continuity issues.

Ragtime: 40th Anniversary Edition will be a two-disc set, with one disc showcasing the original theatrical cut (which includes Digital Copy), while the second disc features the “Director’s Cut.”