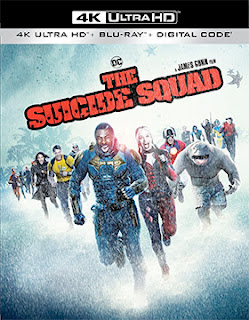 The many adventures of Harley Quinn (Margot Robbie) and company continue on Oct. 26 with the three-SKU launch from Warner Bros. Home Entertainment of writer/director James Gunn’s The Suicide Squad.

The ARR shakes out to 81 days and the current box office tally is $54.7 million.

Planned for release are Combo Pack editions for the 4K Ultra HD (with Blu-ray) and Blu-ray (with DVD) formats, plus a stand-alone DVD edition.

Bonus features, which are exclusive to the Combo Pack SKUs, include commentary from filmmaker James Gunn (Guardians of the Galaxy), a gag reel, deleted and extended scenes, four “scene breakdown” examples and four featurettes — “Gotta Love the Squad,” “The Way of the Gunn,” “Starro: It’s a Freakin Kaiju!” and “Bringing King Shark to Life.”