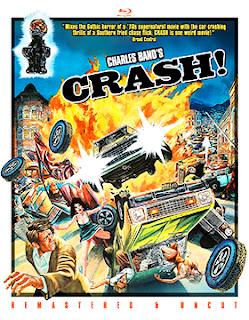 There will be both DVD and Blu-ray editions available.

Filmed during the summer of 1976 on the streets of Los Angeles, prolific director and producer Charles Band was just 25-years-old and just getting started.  This was the first of a series of films — as either producer or director — that literally put him on the map and got him rolling.

He had to start somewhere and Crash! is as good a starting point as any.

You would think that a divorce would be the civil way of ending a marriage.   But when it comes to Marc Denne (José Ferrer — Oscar nominated three times in his film career, he won Best Actor laurels in 1950 for Cyrano de Bergerac), the ending to his marriage with trophy bride Kim (Sue Lyon — Lolita, The Night of the Iguana, End of the World, The Astral Factor) will not be pretty. 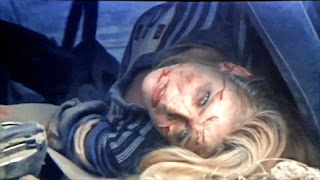 He is a highly regarded dealer in antiquities and is now wheelchair-bound as a result of an auto accident that he blames on Kim.   His anger has been building for some time now.   It reaches a breaking point when Kim, trying to be nice, presents Marc with a gift that she found at a flea market.

The trinket appears to be a little statue of the ancient Hittite god of Akaza, but instead of being pleased, Marc flies into a rage and Kim departs with token in hand, drives off, but Marc at that moment hits upon this as being the perfect moment and sends his trained Doberman after her.

She is involved in a nasty car wreck.   Two things, Marc figures she’s dead, that proves to be wrong, and second, the crash didn’t kill her, but landed her in the hospital, identity unknown.

Meanwhile, her ebony black Camaro has magically put itself back together and now rampages through the streets of Los Angeles, possessed by Akaza. 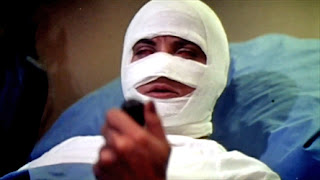 Back at the hospital strange things are going on, Kim has no idea who she is and Dr. Martin (John Ericson — Pretty Boy Floyd, The Bamboo Saucer) has taken an interest in his pretty patient and invites her back to his place to “recuperate.”   He also decides to play detective and figures that the little trinket she’s been hanging on to might be a clue as to who she is.   The best person to help solve this mystery is the go-to expert in antiquities, Marc Denne (small world).

When Marc gets wind of what has happened to Kim, he hatches a plan to be rid of her once and for all.   Will he succeed?  Will the curse of Akaza have anything to say about this?  Will the rogue Camaro come rolling home?   Will Dr. Martin figure things out and save the lovely Kim?   For the answers, be sure to check out Full Moon Features’ Blu-ray debut of Crash! on Dec. 14!

Bonus goodies include commentary by director Charles Band who is joined by long-time associate and fellow filmmaker David DeCoteau, plus there is the documentary titled Speed Demon: Crash!. 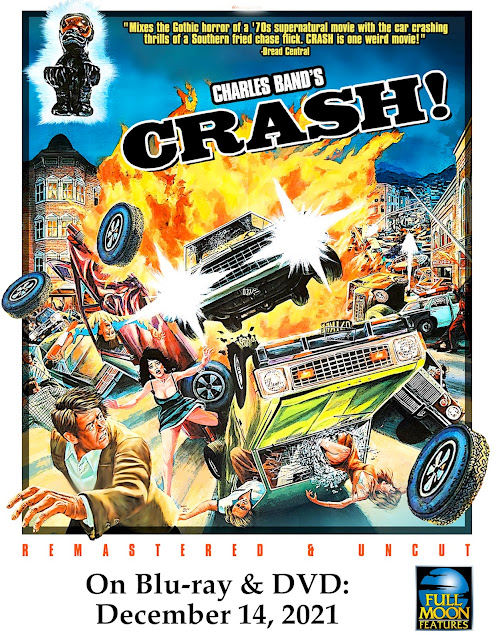