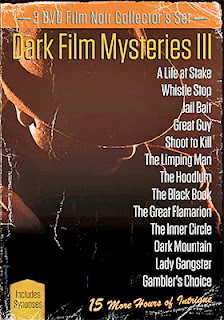 On Nov. 16 we can report that the lucky number will be 13.   That’s the number of mysteries, thrillers and film noir films that the Film Chest has assembled for its next Dark Film Mysteries DVD collection (a three-disc set).   This will be the third volume in the popular collectible film series from Film Chest.

Where to begin?   There are so many wonderful films …

Told in flashback, it begins with chaos at a music hall in Mexico City as shots ring out and the police are summoned.   Instead of finding someone full of bullets, the police discover Connie Wallace, one of the music hall performers, strangled to death.   They quickly place the blame for her untimely demise on Eddie (Steve Barclay), her husband … case closed.

The place now empty, save for Tony (Lester Allen), a clown performer, who is busy tidying up, when WHOMP from the rafters tumbles The Great Flamarion (played by none other than Erich von Stroheim), who is dying of gunshot wounds … mystery solved on that shooting front. 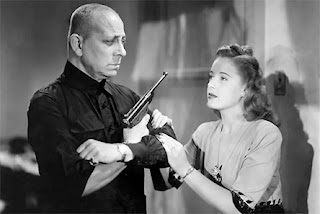 His death certain, he confesses to Tony that it was he who strangled Connie and then proceeds to tell him the entire backstory in flashback (very effective).

It seems that they worked the vaudeville circuit back in the United States and Connie was married to a drunk by the name of Al (Dan Duryea — The Little Foxes, Sahara, None But the Lonely Heart), who will not give her a divorce.  She comes up with a nifty little plan to do away with Al — a murder in plain sight!

It seems that The Great Flamarion is a trick shot performer, very skilled in what he does, so she seduces him and convinces him to shoot Al during a performance in front of an audience.   He does, it is ruled an accident since poor Al was drunk at the time!! 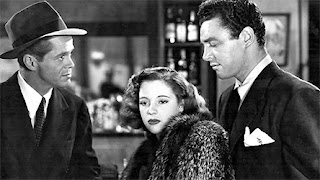 Connie is one nasty woman.   She convinces him to meet her in Chicago in three months (let things cool off), but she is secretly having an affair with Eddie and they have a year-long contract to work south of the border.   When the poor schmuck shows three months later, no Connie … and thus begins his long quest to find her!!

Another film in the Dark Film Mysteries III collection from auteur filmmaker Anthony Mann is his 1949 French Revolution thriller, The Black Book (aka: Reign of Terror),

The movie is constructed as period piece, complete with real characters from the French Revolution, with the exception of Charles D'Aubigny (Robert Cummings — Kings Row, Saboteur, Dial M for Murder), who is the hero of the piece.   None other than the Marquis de Lafayette has given Charles the assignment of stopping the treacherous Robespierre (Richard Basehart) before he can become the dictator of France. 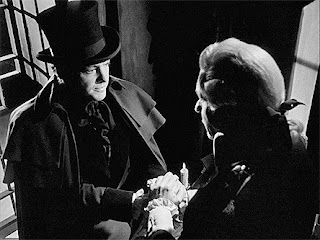 To accomplish this, Charles murders the equally ruthless Duvall, Robespierre's newly appointed prosecutor (inquisitor) — whom Robespierre has never met personally — and assume his identity.   Later Charles (as Duvall) meets with Robespierre, who give him an assignment, find a missing “black book” that contains a list of people that he has marked for death … the book is missing.

It is a race against time.   Will Duvall’s identity be uncovered?   Will the book be found?   And what of the mysterious Madelon (Arlene Dahl — A Southern Yankee, Scene of the Crime, Journey to the Center of the Earth)? 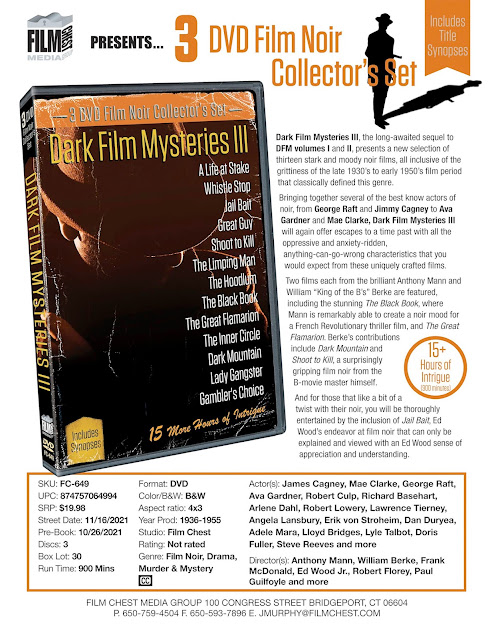