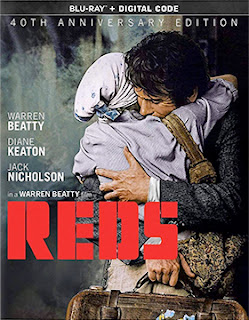 It was a busy week over at Paramount Home Entertainment with three new Blu-ray announcements, two of which focus on Warren Beatty.   Let’s cut right to the action.

Nov. 30 will be the street date for actor, writer, producer and director Warren Beatty’s two-decade long interest in the writings of John Reed (“Ten Days That Shook the World”) which finally made it to the screen in 1981 as Reds.   Paramount is putting out a Blu-ray edition titled Reds: 40th Anniversary Edition as a double-disc release, which is a new 4K film restoration from the original camera negative.

John Reed (played by Warren Beatty) was an American journalist who bounced around Europe during the first two years of World War I as a “war correspondent,” but if the truth be known he spent much of the time drinking and having sexual encounters.

We pick up the action in Beatty’s Best Picture nominated Reds (Beatty won the Best Director Oscar for his work here) with Reed meeting Louise Bryant Trullinger (Diane Keaton) at a political event back in the United States in 1915.  Despite being married, John “Jack” and Louise begin an affair, which culminates in her getting a divorce and marrying Reed … but they soon find themselves at odds. 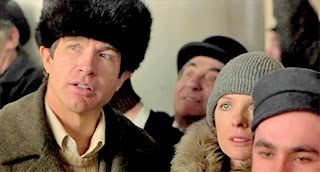 It is not until the two reunite in Europe and travel to Petrograd that the real action begins.   Reed will, despite all of his flaws, literally be in the right place at the right time and became an eye-witness to the Communist revolution in Russia.   His book, “Ten Days That Shook the World” would be published in 1919.   He would fall ill (typhus) and die in Moscow in mid-October of 1920 at the age of 32.

Beatty structured the events and love-story with Louise by punctuating the narrative with 32 actual “witnesses” who offer insights and memories about their encounters with both Jack and Louise.

The film was a full-year in production, but ironically most of the filming took place in England (elaborate sets were built) and winter scenes were filmed in Finland as the Soviet Union denied Beatty access to filming there. 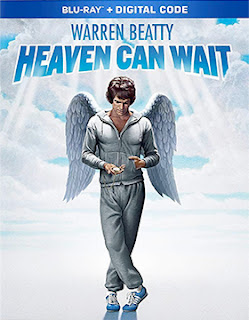 As to bonus features included with this 40th Anniversary edition, there is a multi-part “legacy” collection titled “Witness to Reds” (broken down into seven segments).

Nov. 30 also marks the Blu-ray debut of Warren Beatty’s 1978 film adaptation of Harry Segall’s 1938 play, Heaven Can Wait (which was previously adapted for the screen in 1941 as Here Comes Mr. Jordan).

And, rounding out the new announcements from Paramount this past week is the feature-length animated adventures of PAW Patrol: The Movie.   The street date for both DVD and Blu-ray editions will be Nov. 2.

The ARR works out to 74 days and theatrical ticket sales currently stand at $39.6 million.

Bonus goodies include a pair of production featurettes — “A Totally PAW-some Team” and “ACN: Adventure City News Reports with Marty Muckraker” — and the PAW Patrol: The Movie Lyric Video.