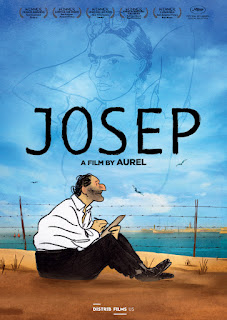 If you are a fan of animation, then you can set aside your Pixar films for an evening and enjoy French filmmaker Aurel’s 2020 César Awards-winner for Best Animated Film (the French equivalent of our Oscars), Josep, the biographical story of famed Catalan newspaper illustrator and artist Josep Bartolí and his experiences as a young man in France.

Josep, a rare French animated film, joins the sweet company of director Sylvain Chomet’s Oscar-nominated The Illusionist (2010) and The Triplets of Belleville (2003), René Laloux’s Fantastic Planet (1973), Simon Rouby’s haunting Adama (2015) and the writing and directing team of Vincent Paronnaud and Marjane Satrapi’s Oscar-nominated Persepolis (2007).   It is that good, and quite a feat for a debut feature film from Aurel (a French newspaper cartoonist and comic book author).  Josep worked the international film festival circuit beginning in June of 2020, moved into selected European theatrical venues (pulling in a solid $1.6 million in ticket sales) and in March of 2021 captured the Best Animated Film award at the 46th annual César Awards.

Told in flashback by a dying prison guard, on his deathbed some 50 years after the events, we learn how he met and befriended Josep Bartolí, the famed Spanish newspaper cartoonist and anti-Franco fighter, who escaped Spain and ended up in a French prison camp.   We learn of Bartoli’s struggles, his eventual release, his love-affair with Frida Kahlo and more.

Josep is presented in French and Spanish with English subtitles. 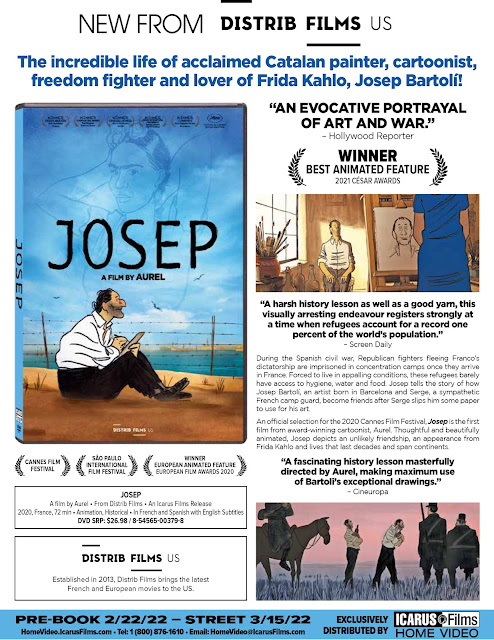