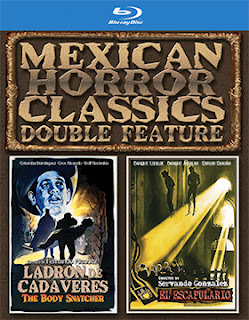 These are new 4K film restorations from the original 35mm camera negatives.

Director Servando Gonzalez’s gothic-like horror story, El Escapulario, takes place during the Mexican Revolution and has an interesting story structure that begins with Father Andrés (Enrique Aguilar — El Asesino Enmascarado, Una Noche Bajo la Tormenta) arriving at the home of a dying woman — two bandits watch his movements with the intention of robbing him, but decide to wait until he gives absolution to the woman, Doña María (Ofelia Guilmáin — as Juana Avila in Luis Buñuel’s The Exterminating Angel).

Once inside, Doña María gives the priest, who is new in town, a scapular (a family relic), which she says has special powers to save lives.   Of course, he is skeptical of such a claim.  She then tells him — in flashback — stories of how it saved her eldest son, Julián (Carlos Cardán) from a hail of bullets fired by troops loyal to Porfirio Díaz, and then later, her youngest son, Pedro (Enrique Lizalde), came into possession of the scapular and has fallen in love with a woman, Rosario (Alicia Bonet), the niece of a wealthy politician who will not allow the relationship … Pedro’s murder is planned. 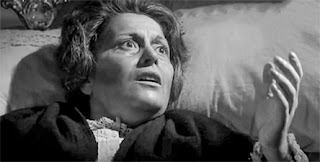 Once the stories conclude, Father Andrés notices a family portrait, which shows Doña María with four children, not just the two she mentioned.   She explains that they were kidnapped by bandits when they were young boys and never seen again.

Outside the priest is waylaid by the two bandits … there is twist ending involving the “dying” woman.

Teamed with this eerie tale is director Fernando Méndez’s Ladrón de Cadáveres, a more traditional horror tale involving a mad scientist and a series of murders, but not just any murders, but those of famous athletes! 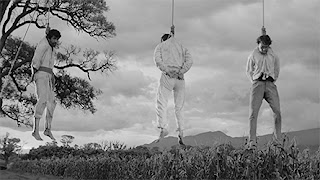 Assigned to the case is police captain Carlos Robles (Crox Alvarado — as Pinacate in the Aztec Mummy series of films … The Aztec Mummy, The Curse of the Aztec Mummy and The Robot vs. The Aztec Mummy), who is completely stumped by the series of gruesome murders.   But he has a plan, an undercover operative who will serve as a lure for the mad killer.

Robles recruits Guillermo Santana (Wolf Ruvinskis — as Neutron in Neutron Battles the Karate Assassins, Neutron vs. the Maniac and Neutron vs. the Amazing Dr. Caronte), a rancher friend of his — who actually wants to be a professional wrestler — to catch the mysterious murderer.   He becomes “El Vampiro” and to complicate things just a bit, he falls in love with Lucía (Columba Domínguez), a woman who works at the gym where Santana has been installed by Robles as bait. 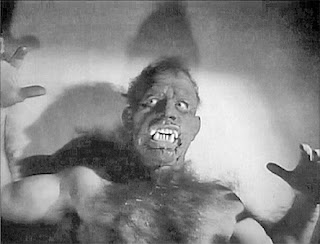 Naturally, things quickly go south as Santana is kidnapped and is butchered … for his brain!!  It seems that a mad scientist Don Panchito/The Professor (Carlos Riquelme — three-time Ariel Awards nominee) has been murdering Mexico City’s top athletes and transplanting their brains into various animals … he is not having much success.

However, our boy Santana survives the operation (sort of) and has his brain transplanted into the body of a gorilla, who returns to the ring and a masked wrestler … a killer wrestler!!   In a beauty and the beast twist, the creature kidnaps Lucía, has his revenge on The Professor and takes flight across the rooftops of the city with Lucía … and the police in pursuit.

Both films are presented in Spanish with English subtitles.   And both El Escapulario and Ladrón de Cadáveres will be available as separate DVD releases on Mar. 22 as well. 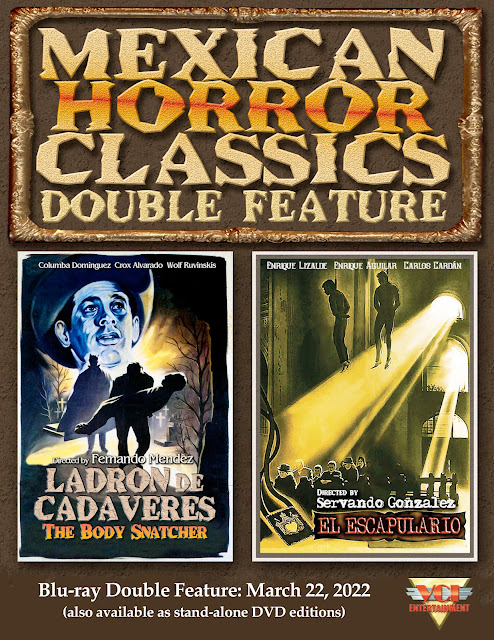