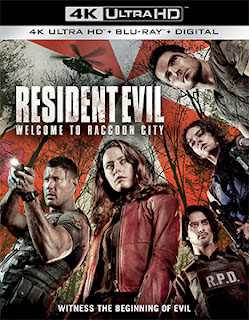 So how did the Umbrella Corporation’s massive underground research facility in Raccoon City come to be?   That question is answered on Feb. 8 with the three-SKU home entertainment packaged media rollout of writer/director Johannes Roberts’ prequel and reboot of the Resident Evil film franchise, Resident Evil: Welcome to Raccoon City.

The ARR comes in at 74 days and domestic box office receipts currently stand at a disappointing $16.9 million, which makes plans for additional theatrical releases in the series dicey.

The film opened theatrically on Nov. 26 (after several delays) and it was quickly followed by a Dec. 21 online option, which pretty much limited any theatrical chances going forward … the trick will be, did streaming, plus box office revenues make any future releases in the series viable?

Bonus features, which are limited to the Blu-ray and 4K Ultra HD/Blu-ray Combo Pack selections, include a trio of production featurettes — “Replicating the DNA,” “Cops, Corpses and Chaos” and “Zombies, Lickers and the Horrors of Resident Evil.”