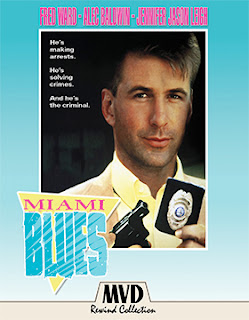 MVD Entertainment Group announced this past week that a new entry to the company’s popular promotional line of Blu-ray releases, “MVD Rewind Collection,” will be getting a new member on July 05.   This will be director George Armitage’s 1990 film release of Miami Blues.

How about this for irony.   Fred Ward, who got steady work after Silkwood, The Right Stuff and Swing Shift, decided to take a little control over the direction of his acting career by optioning Charles Willeford’s 1984 novel, “Miami Blues.”  He loved the character of Junior Frenger and he figured that if he had the rights to the book it would be just a matter of putting the deal together to play the character in the film production.

Smart.   Since Ward had worked with Jonathan Demme on Swing Shift, he knew exactly who he wanted for the direction of the film.   Demme said sure, but he didn’t want to direct, instead he agreed to be the line producer and brought in cult filmmaker George Armitage (Vigilante Force) to write the script and take over the directing of the film. 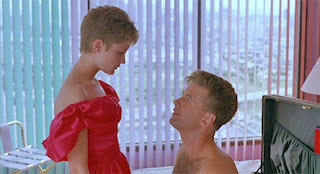 Now Orion Pictures gets excited, Jonathan Demme producing, the studio’s reservations about George Armitage vanished when they saw the script … Fred Ward saw everything come together.   There just had to be one more little change.   Ward gave up the role of Junior Frenger and agreed to take the part of Sgt. Hoke Moseley.   Casting for Frenger was opened up and eventually Alec Baldwin, who has gotten hot with Beetlejuice, Married to the Mob, Working Girl and The Hunt for Red October, got the spot … the spot that Ward first set out to get by optioning the book.

So, who is Junior Frenger?   He’s a hustler, a wheeler-dealer, a forger, a con artist … it is a long, long list of “accomplishments.” 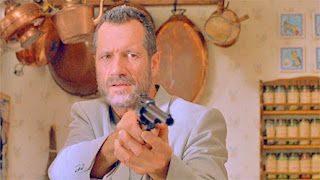 We are introduced to him as he prepares to land in Miami while he is busy learning how to forge the signature of some mark by the name of Herman Gotlieb.   In the airport he grabs a random suitcase and has an encounter with one of those Hare Krishna pests (Edward Saxon) and deals with him by breaking one of his fingers.

Later, at the hotel he tries to hustle a hooker by the name of Susie “Pepper” Waggoner (played by Jennifer Jason Leigh) into buying stuff from the stolen suitcase.   They have a good time anyway (wink wink). 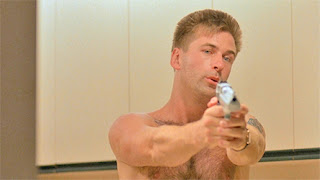 Meanwhile, Sgt. Hoke Moseley (Ward) has gotten a call to head over to the airport, there’s been an incident.   It seems that the Hare Krishna dude went into cardiac arrest as a result of having his finger snapped.   So, it is up to Moseley and his partner to track down the mysterious Gotlieb.

Junior does what he does, hustle, steal, con and hooks up with “Pepper” again.  Meanwhile, Moseley does what he does and tracks “Gotlieb” down, not knowing that Junior, through a complicated series of events, is the guy he’s really looking for.

Miami Blues is a perfect “MVD Rewind Collection” addition.   Fast-paced, violent, sexy and funny as Moseley and Junior cross paths … until Junior’s luck finally runs out.   There is a cool twist involving “Pepper” at the end.

Bonus features include video sessions with both Alec Baldwin and Jennifer Jason Leigh. 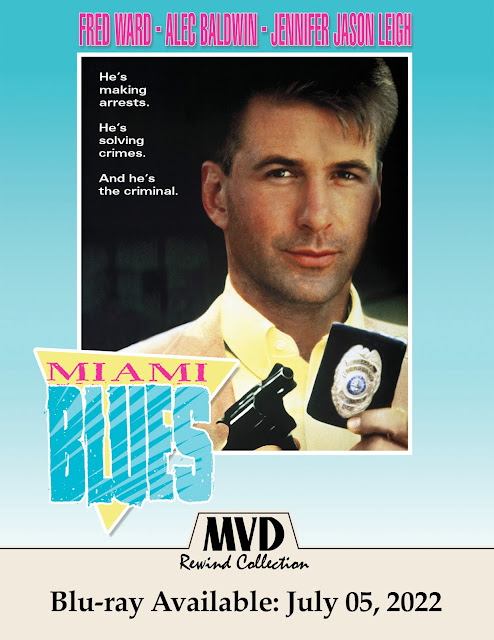