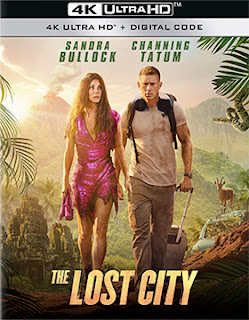 The ARR comes in at 123 days and this Sandra Bullock-produced action/adventure pulled in $90.7 million during its domestic theatrical run.

Bonus goodies include deleted scenes, a blooper reel and a lucky seven-count on the featurettes — “Dynamic Duo,” “Location Profile,” “Jungle Rescue,” “The Jumpsuit,” “Charcuterie,” “The Villains of The Lost City” and “Building The Lost City.”   ­