A funny thing happened on the way to the graveyard for the DVD format.   From a “Hollywood” studio POV, the gates to the graveyard are wide open and the format will certainly be coming to its final resting place in the dust bin of history very soon.   The grave is all but dug … it is just a matter of time.

For the first six months of 2022, studio releases on DVD total just 213 titles.   Only the launch year of the format, 1997, saw a smaller number at the halfway mark of the year … 78 SKUs.   Even the second year of the format, 1998, saw more product offerings at the same six-month mark — that would be 223 titles — compared to this year’s graveyard output.

Clearly the ride is over.   DVD is dead.   Just ask anyone still working in the home entertainment packaged media business at one of the few remaining “Hollywood” studios these days (that would be Paramount, Sony, Walt Disney, Universal and Lionsgate).   The halcyon days are long since over … 1,117 new DVD releases by the mid-point of 2005, it’s been all downhill since then.

There is just one problem with this.   The DVD format, while the “Hollywood” studios are currently holding a death watch vigil, has just set a new record for the most product offerings during the first six months of any year since the launch of the format in 1997.

The preliminary number is 9,923.   The “Hollywood” studios chipped in 213, while other suppliers generated a whopping 9,710 new DVD releases.   Did they miss the memo? 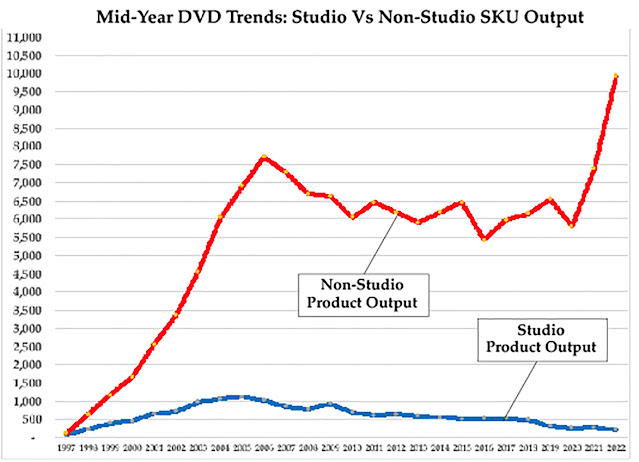 Last year at this point, the number of new DVD releases was 7,388.   That is a 34.2 percent jump in activity on a year-over-year basis.   Why?   What the hell is going on?   If the “Hollywood” studios have given up on the format that they launched; a format that has generated billions in profits, why are new release numbers setting all-time records?

Manufacturing on Demand.  MOD.  Anyone can get into the business.   And they are doing that with record SKU output.   Since the industry has always been studio-centric, no one in the home entertainment packaged media marketplace pays too much attention to what is going outside the “Hollywood” studio system. 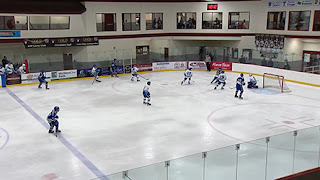 So where are these numbers coming from?   Sports is a big contributor.  Back in 2013, the NFHS Network was launched.  It was a streaming service for high school sports, but they soon discovered that fans (family members) would pay for a DVD edition.   It got so popular that the NFHS Network had to cut back to just post-season games … and there are hundreds of those each year to select from.

Well, if the NFHS Network (which is, ironically, owned by CBS … a “Hollywood” studio member) can do it, then why not every local broadband indie network, which broadcasts the local high school and college sports as part of their programming.  It took a while for some to figure it out, but once they did there was no stopping them.  DVD and, in some cases, Blu-ray, for all games broadcast in their micro-markets.

And, if the locals wanted to buy their local sports broadcasts on DVD, why not the local high school band concerts, local parades, even the city council meeting (for what purpose boggles the imagination) and certainly high school graduations.   The flood gates were opened. 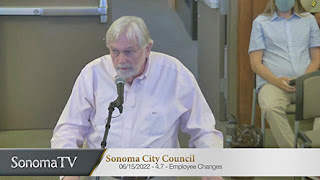 Another big source is piracy of “Hollywood” studio film libraries.  PD films were always a market, but once Warner Bros. turned over its Warner Archive to Amazon to manage (who really doesn’t care about such things), it signaled that the film libraries were up for grabs … the attitude is that all films from the 1930s, 40s, 50s and 60s are now without copyright (PD) and are fair game.   Guess what, the “Hollywood” studios don’t care.   A blizzard of film releases on MOD has followed.

If the “Hollywood” studios don’t monitor their film libraries and are streaming everything under the sun (oh, those lovely digital masters), why not pirate everything else … they don’t care.   DVD, and even more-so Blu-ray, has become a vehicle for anything on any streaming platform … period.

Add in the old standbys of Religion and Special Interest (How-To) and you can easily see how DVD is setting new release records in its 26th year… so much for being on the way to the graveyard!