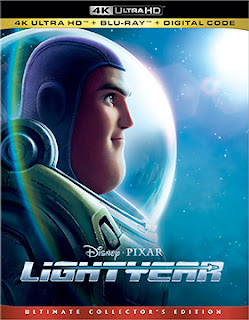 The ARR works out to 88 days … the current domestic box office gross stands at $117.1 million.

Planned for release are Combo Pack editions for both the 4K Ultra HD (with Blu-ray) and Blu-ray (with DVD) formats, plus a stand-alone DVD SKU.

Bonus features include commentary from MacLane (Finding Dory), who is joined by co-writer Jason Headley (Onward) and the director of photography Jeremy Lasky (Finding Nemo), a half-dozen deleted scenes and three featurettes — “Building the World of Lightyear,” “The Zap Patrol” and “Toyetic.”