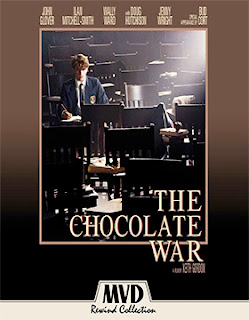 MVD Entertainment Group has a new Rewind Collection entry, which is set to join the new-to-Blu-ray party on Sept. 27.   This is none other than actor-turned-director Keith Gordon’s 1988 film adaptation of Robert Cormier's 1974 novel, The Chocolate War.

As an actor, Keith Gordon got to work with the likes of Brian De Palma (Home Movies and Dressed to Kill) and with John Carpenter on the 1983 film adaptation of the Stephen King novel, Christine, where he played the main character, Arnie Cunningham.

Being a bright guy and talented, he decided at some point after Christine hit theatres that it might be a good idea to take a little control over his film career. To that point, he set out to acquire the rights to Cormier’s book so that he could play the role of Archie Costello.   Gordon quickly discovered that the “Hollywood” studios had sniffed around Cormier’s book, but the word on the street was that it was too dark, too dangerous (it had been banned in several places) and too controversial. 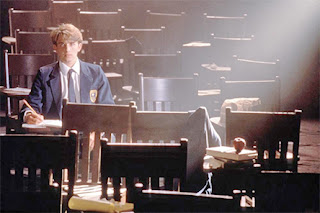 Hello, that’s the point, Gordon wanted to play a dark, dangerous, controversial character, who wouldn’t!!  He’s an actor and wasn’t Arnie Cunningham a dark and dangerous character in Christine?  Gordon wanted more of that!

Fortunately, he came in contact with producer Jonathan D. Krane’s newly formed Management Company Entertainment Group (or simply MCEG) and they struck a bargain.   Krane would produce and Gordon would adapt Cormier’s novel and direct, but the part that he so coveted would go to Wallace Langham (aka: Wally Ward … perhaps best known for his role as David Hodges in the CSI: Crime Scene Investigation television series … other film roles include Weird Science, Soul Man, Vital Signs, Michael, Little Miss Sunshine, etc.). 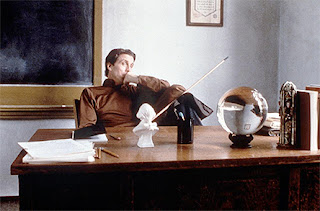 As to the story, rebels are not allowed at Trinity School, a Catholic boys-only prep school.  When student Jerry Renault (Ilan Mitchell-Smith — Weird Science, The Wild Life) comes in conflict with Brother Leon’s ambition schemes (played by five-time Emmy Awards nominee John Glover — as Lionel Luther in the Smallville TV series … films include Rocket Gibraltar, Scrooged, Gremlins 2: The New Batch), the anything-but-pious clergyman sets sociopath Archie Costello and his brotherhood of “Vigils” on him … conform, or be systematically isolated from all other students.

A test of wills ensues.   Who breaks?   Sept. 27 will bring the answer with the Blu-ray debut of The Chocolate War from MVD Entertainment Group.

As to bonus goodies, we have commentary from director Keith Gordon and a vintage video session with Gordon. 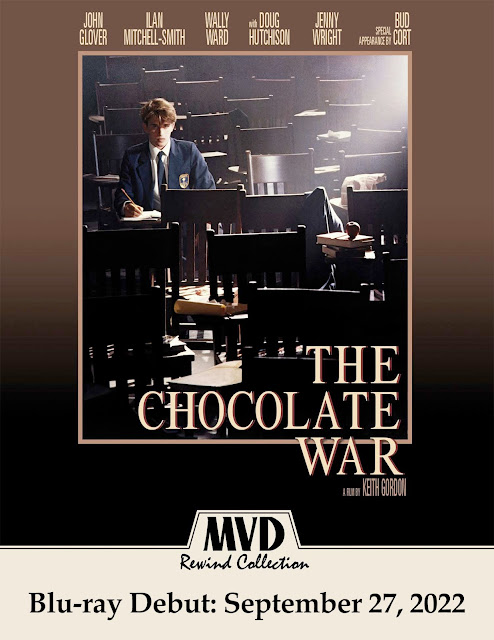