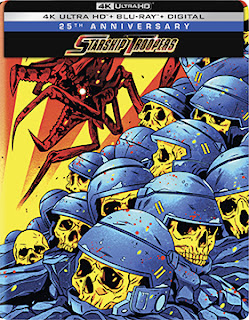 It was an unlikely sci-fi winner … that would be director Paul Verhoeven’s 1997 film adaptation of Robert A. Heinlein's 1959 serialized novel, Starship Troopers.  So much of the early narrative was almost nonsensical, but once the action kicked in, Starship Troopers was a non-stop adrenaline rush.   Genre fans celebrated it … and learning things too: “The only good bug, is a dead bug!”

Sony Pictures Home Entertainment announced this past week that a 4K Ultra HD/Blu-ray Combo Pack 25th Anniversary Edition will be available for all to enjoy on Nov. 1.