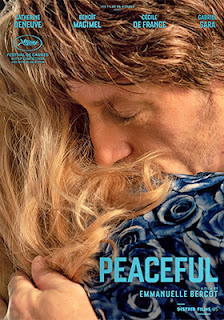 Icarus Films will be teaming up with France’s leading film production and distribution company, Distrib Films, on Nov. 08 for the domestic DVD premiere of director Emmanuelle Bercot’s Peaceful.

No parent wants to bury their child.

That’s the dilemma that Crystal Boltanski, played by the seemingly ageless Catherine Deneuve (14 times nominated for France’s Oscar- equivalent, the César Awards — with wins for her performances in François Truffaut’s The Last Metro and the 1992 film release of Indochine … the same film also saw her only Oscar nomination … plus such greats as Repulsion, Belle de Jour, The Young Girls of Rochefort, Mississippi Mermaid, etc.), faces when her son, Benjamin (Benoît Magimel — he won the Best Actor César Awards for his performance here), gets the death sentence of stage four pancreatic cancer … a year at best; perhaps only six months, it is just a matter of time.

The fight is on as Benjamin has so much to look forward to.  He is a theatre professor with students to prepare.   Denial, anger, bargaining, depression … and acceptance are all in the mix as Benjamin and his mother are forced to face the unbearable.

Also in the mix are his doctor Eddé (an actual oncologist, Gabriel Sara, playing himself), his theatre teaching partner/assistant Eugénie (Cécile de France — seven-time César Awards nominee — wins for Russian Dolls and The Spanish Apartment), the lovely Lola, one of his students (Lou Lampros — The French Dispatch) and a son half-a-world away, Léandre (Oscar Morgan).

The film opened at the Cannes Film Festival in July of last year, made additional festival stops and then opened theatrically in France in late November.   As near as we can tell, the screening at the Stony Brooks Film Festival this past summer was the only chance for domestic audiences to catch the film, which means Icarus Films’ Nov. 8 DVD launch can’t come soon enough.

Peaceful is presented in French with English subtitles. 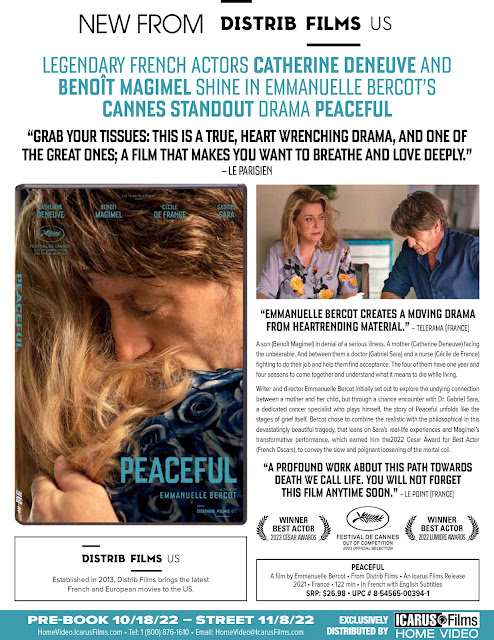