Synapse Films, with sales and distribution expertise provided by MVD Entertainment Group, announced this past week that a new 4K film restoration — from the original 35mm camera negative — of director Joy N. Houck Jr.’s 1976 horror tale, Creature from Black Lake, will be available on both Blu-ray and DVD this coming Dec. 13.

In the swamps of Louisiana there lurks something strange, perhaps an inbred mutant … perhaps Bigfoot himself.   The film opens with a hook featuring one of the locals, Joe Canton (played by Jack Elam — Rawhide, Kansas City Confidential, Kiss Me Deadly, etc.) and his buddy out fishing … they spot the creature, paddle away, only to have Canton’s friend plucked from the boat, never to be seen again.

There are legends and plenty of folklore, and that is exactly what caught the attention of two grad students majoring in anthropology — Rives (John David Carson — Pretty Maids All in a Row, The Day of the Dolphin, Empire of the Ants) and Pahoo (Dennis Fimple — Truck Stop Women, Winterhawk, King Kong) — who road trip their way from Chicago all the way down to the source of the legends (which turns out to be the very lake where Canton had his deadly encounter). 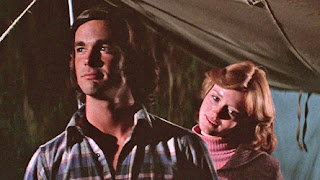 In no time they are in trouble with the town’s sheriff (played by Bill Thurman — Where the Red Fern Grows), but manage to hook up with one of the locals, “Grandpaw” Bridges (played by Dub Taylor — The Wild Bunch, The Getaway, Bonnie and Clyde, etc.), who tells them of his first-hand experience with the creature (a flashback) … it was a deadly encounter as well!!

Our intrepid researchers then flirt with more trouble from the sheriff in the form of his “underage” daughter, Becky (Becky Smiser), but eventually get back on mission and hook up with Canton, who knows his way around the swamp.   Will the next encounter with Bigfoot be the end of them?

Dec. 13 on Blu-ray from Synapse Films to discover the answer.  Even if you know the answer, this 4K upgrade is a must for any Bigfoot film library. 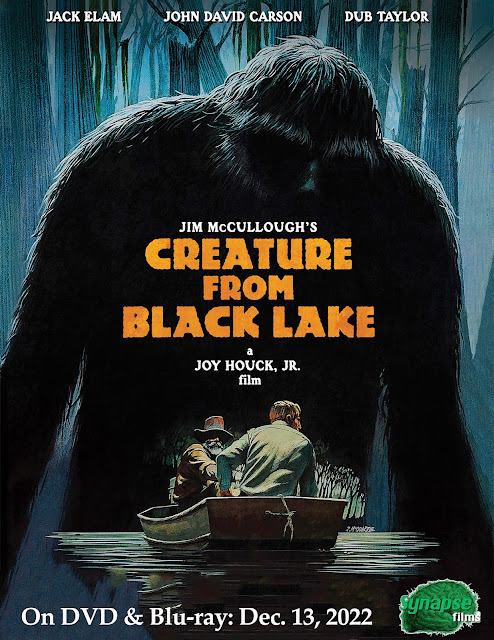