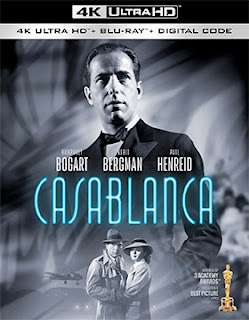 Warner Bros. Home Entertainment will be celebrating the 80th Anniversary of one of the greatest films ever made, director Michael Curtiz’s 1942 Best Picture-winner, Casablanca, with a newly-minted 4K Ultra HD/Blu-ray Combo Pack presentation on Nov. 8.

80-years old and just as enjoyable today as it was when released theatrically in November of 1942.  Best Picture, Best Director and Best Screenplay … Bogart and Claude Rains were both nominated for their acting as well.

Restored and remastered from the best-surviving nitrate film elements for this 4K launch, Casablanca is one of the most researched and talked about films in cinema circles … and deservedly so.

President Ronald Reagan was rumored for the role of Rick Blaine (most creditable sources believe that was nothing more than a publicity plant and that Humphrey Bogart was always the pick from the get-go for the role).   Yes. Ann Sheridan, a super-star at Warner Bros. at the time, was initially tabbed for the role of Ilsa Lund, but it ultimately went to Ingrid Bergman (who was nominated for Best Actress, but not for her performance in Casablanca, but for her role as Maria in For Whom the Bell Tolls). 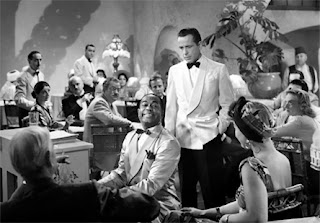 The film itself was almost completely filmed on sound stages on the Warner Bros. lot in Burbank (the magic of “Hollywood” … Morocco in Burbank).  The only reported location shot took place at the nearby Van Nuys airport.

The 4K Ultra HD disc contains two vintage commentary options, the first with Roger Ebert and the second featuring author and film historian Rudy Behlmer (“Memo from David O. Selznick,” “Inside Warner Bros. 1935-1951,” “Hollywood’s Hollywood: The Movies About the Movies”), plus there is a vintage introduction by Lauren Bacall. 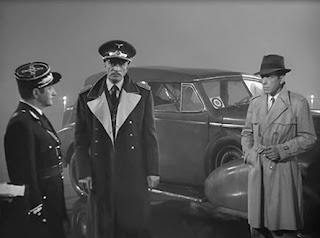 In other release news from Warner Bros. Home Entertainment this past week, there will be two new Blu-ray debuts drawn from the studio’s vast film library.

Heading home for the first time on Blu-ray on Oct. 11 will be director Tod Browning’s 1935 horror film, Mark of the Vampire, reuniting Browning with Bela Lugosi from their 1931 iconic classic, Dracula. 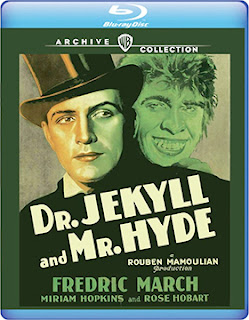 This is a new 4K scan from the original nitrate camera negative (this should really pop on Blu-ray).

Arriving on Blu-ray two weeks later (Oct. 25) is director Rouben Mamoulian’s elaborate 1931 production of Dr. Jekyll and Mr. Hyde, starring Frederic March and Miriam Hopkins … Frederic March would win his first of two acting Oscars for his tormented Hyde/Jekyll performance (The Best Years of Our Lives 1946 would be the other).

This is a 4K scan from “the best surviving nitrate elements” … there are two commentary options, the first (newly-minted) features Dr. Steve Haberman and Constanine Nasr, and the second is a vintage commentary option with Greg Mank.