Mill Creek Entertainment To Release Sci-Fi From The Vault Blu-ray Collection On Dec. 13 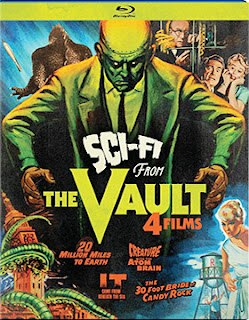 Mill Creek Entertainment has tabbed Dec. 13 as the street date for a double-disc, four-film collection on Blu-ray titled Sci-Fi from the Vault.   Genre-fan favorites one and all!!

So, let’s get this going with a creature-feature thriller from the summer of 1955.  Director Robert Gordon, working with the special effects wizardry of Ray Harryhausen, destroys San Francisco with the help of a gigantic octopus — the result of nuclear testing in the Pacific — in It Came from Beneath the Sea.

Kenneth Tobey, who led the battle in The Thing from Another World and was there in New York City taking on The Beast from 20,000 Fathoms, was no stranger to dealing with creatures, both from another world or right here on earth.   He’s back, this time as the commander of a nuclear submarine, that runs afoul of the eight-legged sea beast while on patrol.

Scientists, are called in and heading up the research team is none other than Faith Domergue as Prof. Lesley Joyce, a marine biologist, who quickly deduces that it was atomic radiation that created the beast … and now it roams the Pacific looking for food. 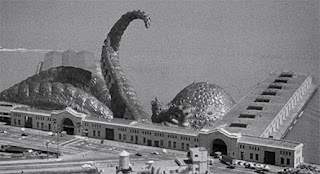 1955 was a very good year for Faith Domergue — in terms of genre-fan pleasures — she also starred in This Island Earth, The Atomic Man and Cult of the Cobra.

In any case, the beast arrives in San Francisco (noted for its fine sea food dining) and destroys numerous landmarks before our sub captain can destroy it!

Also in the collection, and also from 1955, is director Edward L. Cahn’s ingenious gangster-flick-turned-mad-scientist-thriller, Creature with the Atom Brain. 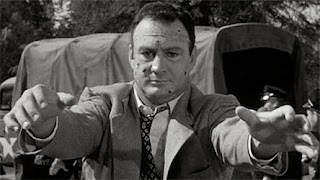 Richard Denning, who was no stranger to 50s sci-fi and horror films (Creature from the Black Lagoon, Target Earth, Day the World Ended) is a scientist who is recruited by the police to help them solve a series of brutal murders … turns out a deported Mafia-type has recruited a mad Nazi scientist to create an unstoppable army of atom-powered zombies.   The dead walk … the dead kill and can’t be stopped!!

Rounding out the Sci-Fi from the Vault Blu-ray collection from Mill Creek Entertainment on Dec. 13 is another Ray Harryhausen treasure 20 Million Miles to Earth, starring William Hopper and Joan Taylor … and the Ymir from Venus, a creature who grows and grows and grows!!! 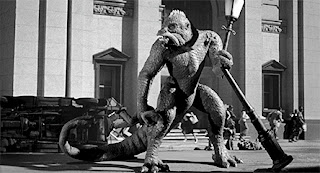 One of the biggest sci-fi films of 1958 was Attack of the 50 Foot Woman, starring Allison Hayes.  As Hollywood usually does with a success, they reason that if one giant woman was a hit, why not another?   That’s exactly what happened in 1959 when iconic funnyman Lou Costello was teamed up with Dorothy Provine in director Sidney Miller’s The 30 Foot Bride of Candy Rock.

Poor Emmy Lou has gotten a dose of cave radiation and, as a result, has grown to be a very-plus-sized woman … it’s up to Artie (Costello), who is an amateur inventor, to get her back to normal size before the army blows her up, literally!! 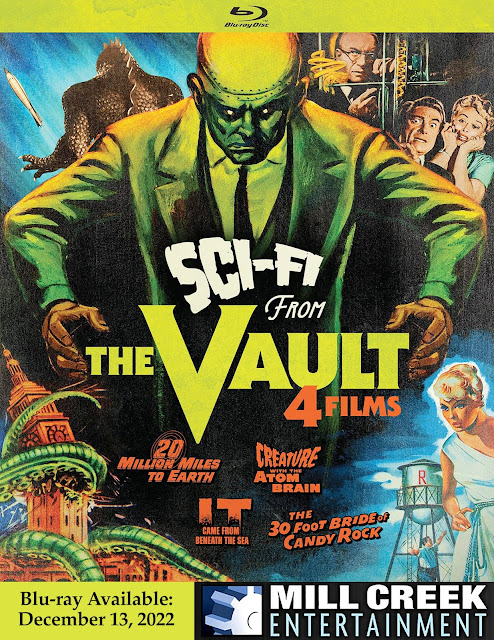 Email ThisBlogThis!Share to TwitterShare to FacebookShare to Pinterest
Labels: Mill Creek Entertainment To Release Sci-Fi From The Vault Blu-ray Collection On Dec. 13