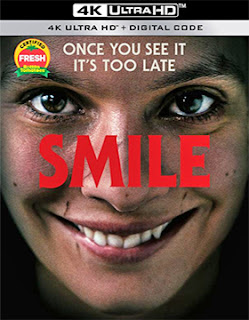 Paramount Home Entertainment announced this past week that a full-spread of home entertainment packaged media products of writer/director Parker Finn’s horror hit, Smile — starring Sosie Bacon (as Skye Miller in the 13 Reasons Why TV series; as Carrie Layden in the Mare of Easttown mini-series) — will be available on Dec. 13.

The ARR for 4K Ultra HD, Blu-ray and DVD selections of Smile works out to 74 days.   Over the weekend, the film crossed the $100 million mark in box receipts $102,777,000 and counting) … add in another $109 million in foreign markets and we may have seen a new horror franchise born.

Back in 2020, Parker Finn was a complete unknown, but he had an eleven-minute short film titled Laura Hasn't Slept, which he began entering in various film festival competitions.   Boom, SXSW Film Festival saw it win the Special Jury Award … ditto for the Mile-High Horror Film Festival (and more).

Paramount took notice and made a deal for a feature-length version, which was destined for streaming on Paramount+, but two things happened along the way.  First, Top Gun: Maverick blew the roof off with its theatrical box office performance and everyone at Paramount saw the benefit of that.   Next, before committing to a final streaming date, the studio began having test screenings of the film and the results were eye-opening … wait!   Stop!   Smile is going the theatrical route first.

Bonus features include commentary from filmmaker Parker Finn, deleted scenes (with optional commentary), a pair of featurettes — “Something’s Wrong with Rose: Making Smile” and “Flies on the Wall: Inside the Score — and the original short film, Laura Hasn’t Slept, which started it all!