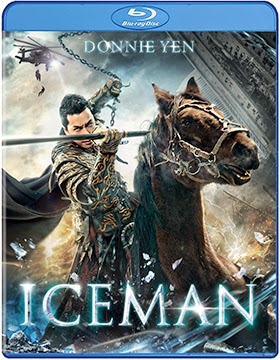 Who needs a time machine when you have a deep freeze that puts some very interesting individuals on ice dating all the way back to the Ming Dynasty (16th Century ice-encased relics).

That’s the premise of director Law Wing Cheong’s mega-budget Iceman, which is heading to the domestic market as DVD and Blu-ray product offerings from Well Go U.S.A. on Nov. 11.

Four ancient “icemen” are uncovered in the film’s prologue in China and are carefully placed in cryo-status tubes for transport back to the lab for examination, but an accident occurs enroute and the time-trapped warriors suddenly find themselves on the streets of Hong Kong.

Ying (Donnie Yen — Ip Man, Lung Fu Moon, The Founding of a Republic), a palace guard wrongfully-accused of murder, awakens to find himself in an alien world.   He has, however, the very good fortune of bumping into May (Shengyi “Eva” Huang — Kung Fu Hustle, The Emperor and the White Snake, etc.) on — as luck would have it — Halloween, so his odd “costume” goes pretty much unnoticed in the manic streets of Hong Kong.

She helps him get orientated (and naturally romance blooms in the process) to his new surroundings, but time and events from a bygone era have a peculiar way of catching up, even to those who are completely out of step with it.

The others that were frozen with him are out for revenge, but they are just as disoriented as he is … which makes for some interesting action sequences as the technology of the Ming Dynasty comes face to face with modern Hong Kong!

Bonus features for Iceman, which is presented in Cantonese with English subtitles, include a behind-the-scenes featurette titled “The Making of Iceman.”