VCI Entertainment To Release On Mar. 10 The DVD Double Feature Of My Dog Shep And Shep Comes Home 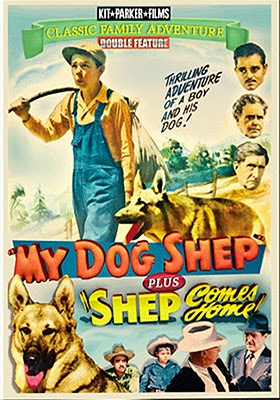 VCI Entertainment announced this past week that Mar. 10 will be the street date for the double feature DVD release of writer/director Ford Beebe’s 1946 family film classic, My Dog Shep, which is teamed with Beebe’s 1948 hit sequel, Shep Comes Home.

Danny (Lanny Rees) loses his parents in tragic a auto accident and is castoff to live with his less-than-friendly uncle (Russell Simpson).   It’s a depressing existence until he rescues an abandoned German Shepherd, Shep, but when the prospect of losing his new friend surfaces he takes to the road.   Adventures and new friendships follow … but an unusual twist for these two orphans surfaces that could change everything!

Email ThisBlogThis!Share to TwitterShare to FacebookShare to Pinterest
Labels: DVD and Blu-ray Release Report, VCI Entertainment To Release On Mar. 10 The DVD Double Feature Of My Dog Shep And Shep Comes Home