20th Century-Fox's Penguins Of Madagascar Left To Their Own Devices On Mar. 17 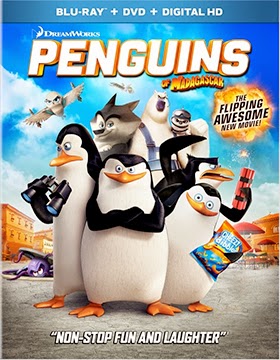 Skipper, Kowalski, Rico and Private are funny, very funny, and they are of course the stars of the DreamWorks Animation production of Penguins of Madagascar.   With $80.8 million in ticket sales you’d figure that 20th Century-Fox Home Entertainment would be eager to sing their praises, but sadly that is not the case for the launch of DVD and Two Blu-ray/DVD Combo Pack editions (one with and one without a 3D viewing option) on Mar. 17.

As has become the modus operandi of 20th Century-Fox Home Entertainment of late, there will be no PR support for this animated laugh-fest.
The ARR works out to 109 days.

Bonus features include a deleted scene, a pair of music videos and six featurettes.

Email ThisBlogThis!Share to TwitterShare to FacebookShare to Pinterest
Labels: 20th Century-Fox's Penguins Of Madagascar Left To Their Own Devices On Mar. 17, DVD and Blu-ray Release Report