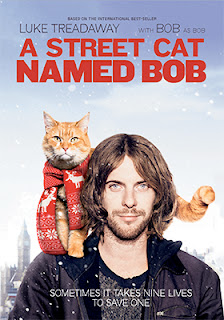 Cleopatra Music and Film, with sales and distribution expertise provided by MVD Entertainment Group, will be bringing director Roger Spottiswoode’s 2016 film adaptation of the James Bowen and Garry Jenkins’ best-selling novel, A Street Cat Named Bob, to home entertainment marketplace as both DVD and Blu-ray product offerings on May 9.

The film had a very limited domestic theatrical break during the Thanksgiving period this past year (opening on just 24 screens nationwide — against the likes of Fantastic Beasts and Where To Find Them, The Edge of Seventeen and Nocturnal Animals), thus the DVD debut in early May will be the first chance for the film to reach a mass consumer audience.   For the record, the ARR comes in at 172 days and box office receipts totaled $82,703.

Real-life stories are often better tales than their fictional counterparts … and such is the case here.   James Bowen (played by Luke Treadaway — Unbroken, Clash of the Titans, The Hollow Crown, etc.) lives on the streets in London as a homeless, drug-addicted failure, who seems — at first — to be the most unlikely of heroes.

A social worker by the name of Val (Joanne Froggatt — best known to American audiences as Anna from the Downton Abbey television series) gets him into a “last chance” program that takes him off the streets and into a modest apartment.

She’s heard it all — every reason and excuse; every hustle.   But she does her job, gets him shelter and into a methadone program (trading, in effect, one addiction for another), but you get the sense that it might be to no avail.  Let’s just count the days until he’s back on the streets.

And then — remember, this is based on a true story — a miracle happens that will forever change Bowen’s life.   A stray cat, with an infected leg, wanders into his apartment.   It must belong to one of his neighbors, but inquiries prove to be fruitless.   What to do?

His neighbor, Betty (Ruta Gedmintas — The Strain, The Incident), who has issues of her own, suggests a name for the cat, Bob (the cat in the film is the actual cat, whose name is Bob) and some advice on getting the little guy nursed back to health.   That requires that Bowen actually do something for someone other than himself … Bob the cat.

The plan is a simple one.   Get Bob’s leg healed, get rid of Bob and then he will be free to get back to his meaningless, addicted lifestyle.   There’s just one problem, Bob has “adopted” Bowen and will not leave his side.   He rides on the bus with him, helps him out with his street gigs … and suddenly passers-by take notice of the two; audiences grow and the legend of Bob the cat is born!

Bonus goodies for this feel-good film include video sessions with cast members, a still’s gallery and behind-the-scenes footage. 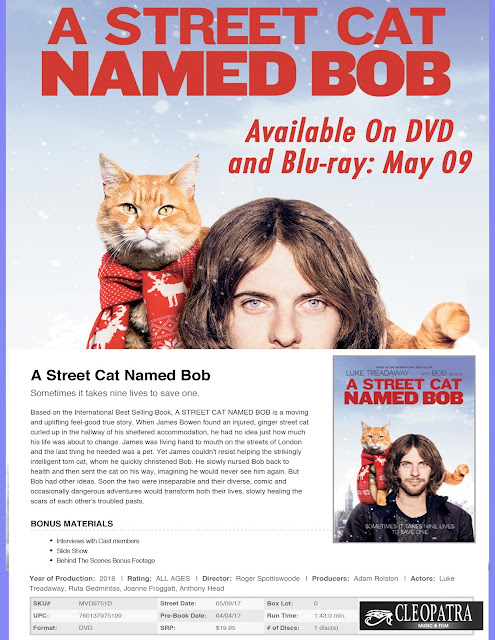 Email ThisBlogThis!Share to TwitterShare to FacebookShare to Pinterest
Labels: Cleopatra Music And Film Teams With MVD Entertainment Group For The May 9 DVD Debut Of A Street Cat Named Bob, DVD and Blu-ray Release Report