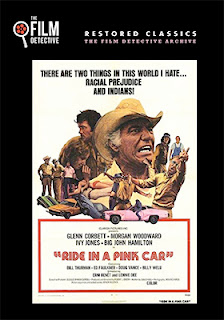 The Film Detective has announced that ten new film restorations will be heading to the DVD marketplace on Mar. 14.

Leading the charge is writer/director Robert J. Emery’s 1974 independent theatrical release of Ride in a Pink Car, which is making its DVD debut here (previously only available on VHS).

Gid Barker (Glenn Corbett — The Crimson Kimono, Homicidal, Chisum, etc.) is dead, he died in Viet Nam.   Not really, but everyone back home in Benton, Florida thinks that he died.

It’s news to him, and to his very surprised now ex-girlfriend Sheryl (Ivy Rose), who, thinking he was dead, married his brother Frank (Edward Faulkner).   The news gets even darker when Gid hooks up with his old boss, who warns him to get out of town — he even offers to find him employment in Atlanta as an enticement to hit the road.

It seems that the Richman clan has taken over the town, they own the law and even have Rain Eagle (Erni Benet), Gid’s old buddy — an Indian — locked up in jail for murder.  What’s a “dead man” to do?   Sweetheart gone, buddy in jail and the powers that be are ready to bury you … if you are a loner Viet Nam vet with a short fuse and a skill set you fight back! 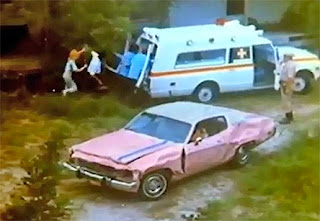 Before the closing credits, “Billy Jack” will be resurrected (Ride in a Pink Car is a very close cousin to Tom Laughlin’s 1971 mega-hit), blood will flow and old lovers will be reunited.
What does the “Pink Car” have to do with all of this?   It seems that there is a stranger in town, who drives a pink Plymouth Sebring, who comes to the aid of Gid on various occasions.   The car takes a hell of a beating during the film’s 83 minutes, but it is still running (sort of) at the twist ending.

Also on the Mar. 14 release calendar is director Stu Segall’s 1976 film release of  C.B. Hustlers.   Before Convoy and before Smokey and the Bandit, there was C.B. Hustlers and the celebration of the technology — the C.B. radio — that could defeat speed traps and get those truckers past old smokey! 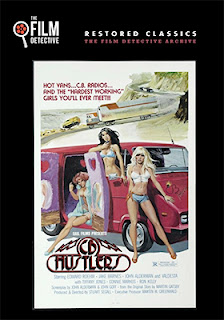 The Film Detective loads up on Westerns in this Mar. 14 release package with seven tales of the old west, three of which star William Boyd as Western icon Hopalong Cassidy … these are: Range War (1939), Renegade Trail (also from 1939) and Pirates on Horseback (Hopalong Cassidy rides in this 1941 release).

The other Westerns in the group are (in chronological order): Rawhide (1938, with baseball legend Lou Gehrig, who is teamed with Smith Ballew and Evalyn Knapp), Fugitive Valley (1941, starring Ray “Crash” Corrigan), Gangsters of the Frontier (Tex Ritter rides in this 1944 Western release that co-stars Dave O'Brien) and director Albert C. Gannaway’s 1957 film releases of Raiders of Old California, whose cast includes the likes of Jim Davis, Marty Robbins, Faron Young, Harry Lauter and Lee Van Cleef).