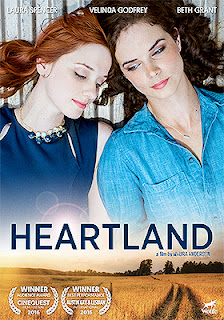 Emotional stress can lead to the metaphorical “digging of holes.”

In Wolfe’s DVD debut of director Maura Anderson’s Heartland on June 6 we also learn that sometimes you just have to stop digging and accept the fact that everything is screwed up … and just deal with it.   There are bigger issues at play.

Lauren (played by Velinda Godfrey, also co-wrote the script with fellow actor Todd Waring) has just lost her friend and lover to cancer.   For her it is a tough emotional time and that is to be expected.   Grief can consume.

She retreats to her childhood home in Guthrie, Oklahoma (about 20 miles north of Oklahoma City), to live with her widowed mother, Crystal (Beth Grant — No Country for Old Men, Little Miss Sunshine, Rain Man, etc.), who believes in her heart of hearts that her daughter will become “straight” once again.

Mom always has a smile on her face, keeps busy with her hobbies and is a devout church-goer … she’s a sweet lady.   Lauren’s mother means well, but she’s not going to fix things, so it is best not to get into it.   Time, more than anything, will heal the pain of Lauren’s loss.

Also back home is Lauren’s brother, Justin (Aaron Leddick), who knows how to keep mom at bay (the right words; the right amount of devotion).   He is consumed with getting ahead and has big plans for a Napa-style winery on the outskirts of Oklahoma City.

He offers little comfort to his sister and has little time for his fiancé , Carrie (Laura Spencer — perhaps best known to audiences as Jessica on the Bones television series and as Emily of The Big Bang Theory), who is like a fish out of water in Oklahoma (a California girl).

Director Maura Anderson and actor/writer Velinda Godfrey have set up the first act of the film with character introductions that deliver some interesting dynamics  — a grieving Lauren, her cheerful mom, a way too-busy brother and his fiancé, who now has time on her hands when Justin suddenly takes off on matters relating to his new business venture.
The chemistry between Lauren and Carrie is, at first, that of two friends hanging out — a visit to some childhood places, a local roadhouse for some fun … and then.   It’s the “and then” part that sets off the emotional hole-digging.   Her mom doesn’t understand and is hurt; her brother is furious …

Heartland challenges the viewer and, like life, it can get messy.   At what point do loving family members stop digging and start healing; start meeting the emotional needs of those who need the help most?   Yes, Heartland is a challenging film that breaks conventions, it doesn’t hold to well-worn genre motifs and that means that not everything will be neatly resolved by the final fade to black. 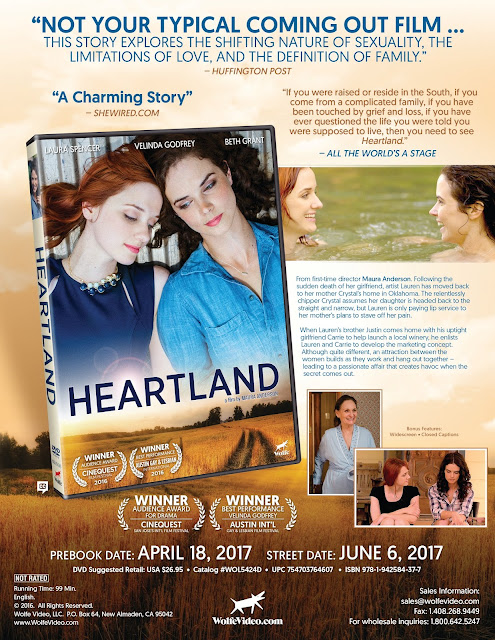