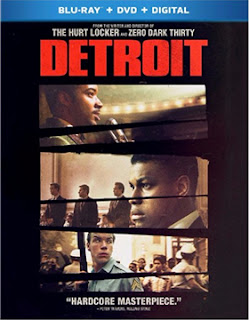 20th Century-Fox Home Entertainment will be guiding the Annapurna Pictures’ production of writer/director Kathryn Bigelow’s Detroit to the home entertainment marketplace on Nov. 28 as both DVD and Blu-ray/DVD Combo Pack editions.

The ARR for this independently distributed theatrical release, which is the final summer-season film grossing in excess of $10 million to get a street date, works out to 123 days.   Box office receipts in the domestic market came in at $16.8 million (that’s a solid number for an indie).

Based on the 1967 “Algiers Motel” police action, which occurred during the Detroit riots of July 1967, the film arrives as a home entertainment production with bonus features that include the Algee Smith music video “Grow,” featuring the actual Larry Reed, plus five featurettes — “The Truth of Detroit,” “The Cast of Detroit,” “The Invasion of Detroit,” “The Hope of Detroit” and “Detroit: Then and Now.”