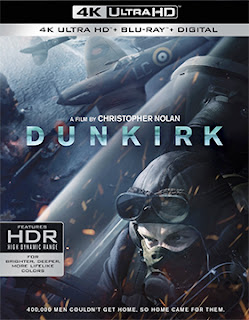 Unless there’s something lurking in the weeds during the Christmas-season rush of new film releases that, cinematically-speaking, could upset the apple cart, the clear front-runner for Best Picture Oscar laurels in 2017 is writer/director Christopher Nolan’s Dunkirk.

Of course the same thing could have been said back in 1998 when Steven Spielberg and screenwriter Robert Rodat teamed for Saving Private Ryan, which somehow lost to Harvey Weinstein’s insipid Shakespeare in Love.   One of the greatest emotional experiences ever to reach the screen was not Oscar-worthy.
The question is, will Dunkirk suffer the same fate?   The Academy of Motion Pictures Arts and Sciences has a date with destiny on Sunday, March 4, 2018 to turn-around the efforts of its members over the past few years to all but destroy the Oscar brand with some very questionable Best Picture choices — Moonlight over La La Land (or even Hell or High Water); Spotlight over The Martian, Mad Max: Fury Road or The Big Short (take your pick); Birdman, The Artist, seriously.

We while have to wait to see how the crushing politics and hypocrisy of the award’s season plays out, but for now the date of Dec. 19 can be circled on your home entertainment release calendar for the delivery of DVD, Blu-ray/DVD Combo Pack and 4K Ultra HD/Blu-ray Combo Pack editions of Dunkirk to your favorite retail outlet.

Warner Bros. Home Entertainment finally made it official this past week after a three-week battle with retailing giant amazon.com over date-jumping and some confusion over the actual home entertainment launch (sparked by amazon.com).

The ARR is a leisurely 151 days and the domestic box office haul currently stands at $187.7 million.

The battle of Dunkirk plays out in a one-hour (the air battle), one-day (the sea rescue) and one-week (the trapped British and French forces) story that Nolan has cleverly blended together to tell a powerful tale of survival and heroism.

The bonus features are organized along these same lines in three over-arching presentations.   “The Land” features “Rebuilding the Mole,” “The Army on the Beach” and “Uniform Approach;” “The Sea” includes “Assembling the Naval Fleet,” “Launching the Moonstone,” “Taking to the Sea” “Sinking the Ships” and “The Little Ships;” and “The Air” has “Taking to the Air” and “Inside the Cockpit.”

There is also a making-of collection titled “Creation” which include four featurette segments — “Revisiting the Miracle,” “Dunkerque,” “Expanding the Frame” and “The In-Camera Approach.”   Finally, there is one final duo of featurettes titled “Conclusion” — “Turning Up the Tension” and “The Dunkirk Spirit.”