Mill Creek Entertainment Expands Its Jan. 16 (2018) Release Calendar With Blu-ray Editions Of Yor: The Hunter from the Future And S.W.A.T.: Special Edition 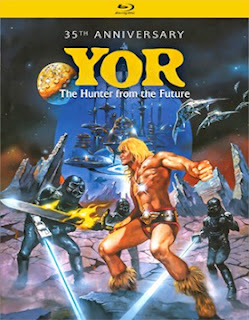 Mill Creek Entertainment continues to expand its first wave of 2018 DVD and Blu-ray priced-to-collect product offering with news this week that Italian filmmaker Antonio Margheriti’s 1983 film release of Yor, The Hunter from the Future, will be available on Jan. 16 as a 35th Anniversary Blu-ray edition.

The future and the prehistoric past intersect in the world of Yor (played by Reb Brown — Sssssss, The Sword and the Sorcerer, Uncommon Valor, Howling II: ... Your Sister Is a Werewolf, etc.), a loner in what appears to be a prehistoric world inhabited by dinosaurs and cave dwellers.

One day he comes to the rescue of a hunter named Kala’a (Corinne Cléry — perhaps best known as “O” in Just Jaeckin’s 1975 film release of The Story of O, plus such films as Bond Girl, Corinne Dufour, in Moonraker) and her mentor, Pag (Luciano Pigozzi), who are under attack from a strange beast. 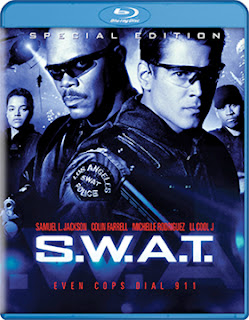 This encounter sets in motion a series of life-and-death adventures that eventually lead Yor and Kala’a to the truth about the world in which they live.  They discover that is a post-nuclear holocaust Earth, with tech-survivor, The Overlord (John Steiner) holding dominion over the planet’s now primitive survivors.

Bonus features include a new commentary option with the film’s star, Reb Brown.
Also heading to Blu-ray on Jan. 16 is S.W.A.T.: 15th Anniversary Special Edition.   Directed by Clark Johnson and starring Colin Farrell, Samuel L. Jackson, Michelle Rodriguez and LL Cool J as Los Angeles S.W.A.T. team members who are locked in a war with a power drug dealer who is aided by a former team member (played by Jeremy Renner).

Email ThisBlogThis!Share to TwitterShare to FacebookShare to Pinterest
Labels: DVD and Blu-ray Release Report, Mill Creek Entertainment Expands Its Jan. 16 (2018) Release Calendar With Blu-ray Editions Of Yor: The Hunter from the Future And S.W.A.T.: Special Edition