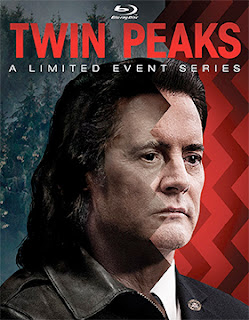 Showtime and Paramount Home Media will be teaming up on Dec. 5 for the release of DVD and Blu-ray sets of Twin Peaks: A Limited Event Series, the long anticipated follow up to the original Twin Peaks saga.

It’s 25 years later and the various storylines of the original are explored by auteur filmmaker David Lynch in his own unique style of filmmaking … and both FBI Special Agent Dale Cooper (Kyle MacLachlan) and the mysterious Laura Palmer (Sheryl Lee) return in the roles made famous in the original series.

So who … or what, is Laura Palmer?  Will the answer be revealed?   Who is Janey-E Jones (Naomi Watts), Diane Evans (Laura Dern) and what does Carrie Page have to do with any of the strange events that unfold(ed) in the town of Twin Peaks (and beyond)?   Dec. 5, all will be revealed in 18 thrill-packed episodes, which can be viewed individually or as seamlessly-prepared feature presentations divided into four individual segments.

Bonus features include a multi-part look behind-the-scenes of Twin Peaks: A Limited Event Series in a documentary created by long-time Lynch collaborator, Jason S., with the over-arching title of “Impressions.”   This is divided into ten roughly 30-minute segments … each with its own title.   That’s quite a feat of filmmaking in its own right. 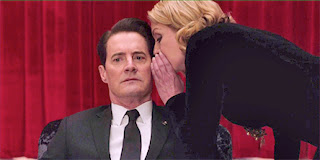 There is the “San Diego Comic-Con 2017 Twin Peaks Panel,” a series of promo spots created by Lynch and the featurette titled “Phenomenon.”

Exclusive to the Blu-ray SKU are three additional featurettes — “A Very Lovely Dream: One Week in Twin Peaks,” “Behind the Red Curtain” and “I Had Bad Milk in Dehradun.”