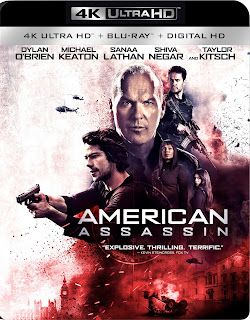 American Assassin is a post-Labor Day theatrical release that is being rushed to market to fill holes in the December release calendar.   The ARR is a sizzling-fast 81 days and box office receipts were a solid $36 million.

This will not be the only post-Labor Day theatrical film to make the cycle before the end of the year.   With fewer theatrical hits to work with (those grossing in excess of $25 million), the studios — not just Lionsgate — will have to fill up the December release calendar with films that would traditionally be released to the home entertainment marketplace during the first quarter of the new year.

Couple that with the constant push to shorten the window between a film’s theatrical debut and its subsequent release on DVD, Blu-ray and 4K Ultra HD, the harsh reality is that there are simply not enough to go around.

So Peter’s pocket is picked to pay Paul now … what holes will emerge in ‘Q1 2018 are for another day.

As mentioned, Lionsgate Home Entertainment will be releasing a stand-alone DVD edition, a Blu-ray/DVD Combo Pack and a 4K Ultra HD/Blu-ray Combo.   The only bonus nugget common to all of these SKUs is the Alamo Drafthouse Q&A session with Dylan O’Brien (as Thomas in The Maze Runner and Maze Runner: The Scorch Trials) and co-star Taylor Kitsch (Lone Survivor, Battleship, John Carter).

Exclusive to the Blu-ray and 4K Ultra HD editions are a quintet of production featurettes — “Target Acquired: Creating an American Assassin,” Finding Mitch Rapp: Dylan O’Brien,” “Transfer of Power: Hurley and Ghost,” “Weaponized: Training and Stunts” and “In the Field: Locations”