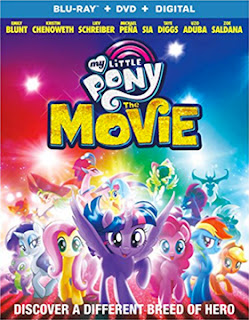 With little fanfare Lionsgate Home Entertainment announced this past week that director Jayson Thiessen’s animated theatrical release of My Little Pony: The Movie will forego a Christmas-season window for the home entertainment launch and look to the New Year for revenue from that source.

Blu-ray/DVD Combo Pack and DVD editions will be available at retailers nationwide on Jan. 9.   That release window yields an ARR of 95 days and the domestic box office take was a tad disappointing with just $21.5 million in ticket sales.

Bonus treasures include a deleted scene, an Equestria Girls animated short, the Taye Diggs music video titled “I’m the Friend You Need” and four featurettes — “Baking with Pinkie Pie,” “Making Magic with the Mane 6 and Their New Friends,” “The Journey Beyond Equestria” and “Hanazuki: Full of Treasures.”