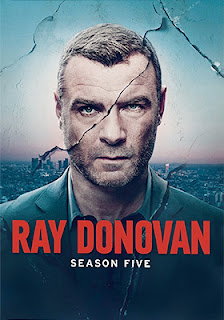 Word came down from Paramount Home Media this past week that Liev Schreiber will be dealing with family and “business” issues on Jan. 30 with the release of the recently wrapped fifth season of Ray Donovan.

This four-disc helping of Ray Donovan: Season Five will feature all 12 episodes, which finds Ray working on his “anger” issues, dealing with a movie star client and Mickey (Jon Voight) trying to peddle the dirt (movie-script) on his many experiences.

The ending, which was aired on Oct. 29, is a real cliffhanger … will it just be the “Mickey Show” next season?   Did Ray die?    Stay tuned as Showtime announced on the eve of the airing of the final episode of season five that the series will be back for a sixth season!!!

Bonus features are being worked on and should be revealed soon.

In other release news from Paramount Home Media this week, the 1988/1990 sci-fi series, War of the Worlds, starring Jared Martin and Lynda Mason Green — with Adrian Paul joining in the action during the second season — will be available on Feb. 6 as an 11-disc set featuring all 43 episodes.