Warner Bros. Home Entertainment Looks To Jan. 9 For The Release Of Stephen King's It 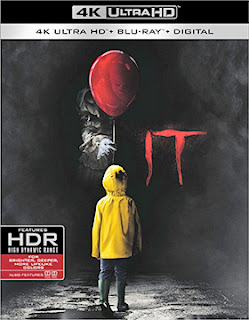 Warner Bros. Home Entertainment made it official this past week that director Andy Muschietti’s remake of Stephen King’s 1986 best-selling novel, It, will be heading home in the New Year.   As a result, Dunkirk will get all of the Christmas-season attention from the studio.

The street date will be Jan. 9, which yields an ARR of 123 days … box office receipts are in the stratosphere with a cumulative total of $326.6 million.   The studio is already looking to the Labor Day weekend of 2019 for the next installment, which was foreshadowed — without spoilers — in the storyline of this release … so a “part two” (with those box office numbers) was a sure-thing!!!

Planned for release will be a stand-alone DVD edition, a Blu-ray/DVD Combo Pack selection and a 4K Ultra HD/Blu-ray Combo Pack SKU.

As to bonus goodies, there are eleven deleted (or “extended”) scenes and a trio of featurettes — “Pennywise Lives!,” “The Losers’ Club” and “Author of Fear.”

Email ThisBlogThis!Share to TwitterShare to FacebookShare to Pinterest
Labels: DVD and Blu-ray Release Report, Warner Bros. Home Entertainment Looks To Jan. 9 For The Release Of Stephen King's It