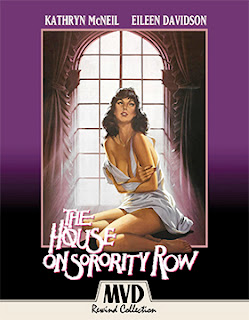 MVD Entertainment Group’s popular “MVD Rewind Collection” line of products on Blu-ray will be getting, not one, but two new members on July 6 (DVD editions will also be available on the same date).  Genre fans will be pleased with the selections!

We begin with writer/director Mark Rosman’s debut film, The House on Sorority Row, which came as complete surprise when it did boffo business theatrically and, quite rightly, over the years became one of the favorite films of the slasher genre.

All the classic elements are here.   A victim pool, and it is some victim pool.  It’s the lovely ladies of the Theta Pi sorority, all neatly assembled … they don’t have to drive to a haunted house, a spooky cabin in the woods or any other remote location.   The terror will come to them.

Included in this group of seven “sisters” is Katrine Rose, aka Katey (Kate McNeil — Monkey Shines, Sudden Death), who will be the “final girl” in the mix.   We are not giving away any secrets here … if you are a genre fan, you’ve seen this horror gem more than once. 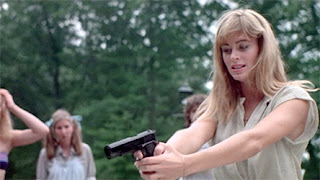 Other members of the victim pool are Vicki (Eileen Davidson, who parleyed her performance here into a career as a Soap Opera queen … The Young and the Restless, Days of Our Lives, etc.) and Diane (Harley Jane Kozak — also a Soap Opera queen, Santa Barbara).

Spoil sport Mrs. Slater (played by Lois Kelso Hunt), the house mother, says that the girls can’t have a party, which ticks Vicki off and she decides to terrorize the old lady by taking her walking stick away from her and to really rub it in, she holds a gun on her … BANG!!   Oops, just killed Mrs. Slater.

Oh, the hell with it, hide the body and party on!!   This is where Rosman’s story kicks in and takes us on a horror trip that delivers all that genre fans want in a slasher flick … bloody murder after bloody murder.

It seems that Mrs. Slater had a deformed son stashed away in the attic and as soon as dear old mom is dead, there’s nothing to keep Eric (Carlos Serio) from killing everyone in the place …how’s that for irony. 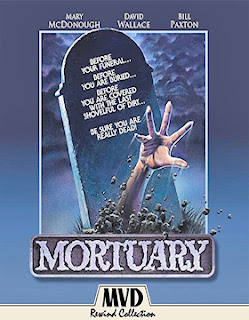 The other new addition to the MVD’s “Rewind Collection” is writer/director Howard Avedis’ 1983 slasher tale, Mortuary, which stars Christopher George and his wife Lynda Day George, along with Mary Beth McDonough (best known as Erin from The Waltons television series) and this new guy, Bill Paxton (his first starring role after a number of small parts in films leading up to Mortuary).

In the film’s opening hook, Christie Parson’s (McDonough) father is murdered and tossed into the pool.   A seemingly random act of violence.

But things start to get creepy with Christie’s boyfriend, Greg (David Wysocki, aka: David Wallace — Humongous) and his buddy Josh, break into the warehouse belonging to the local mortician, Hank Andrews (Christopher George), to get some retribution for money that Andrews owes Josh.   They see something they are not supposed to see and Josh is soon slashed to death by a mysterious figure. 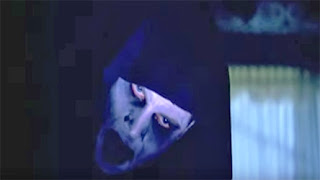 We should note, attending the little ritual that Josh and Greg were not supposed to see, was none other than Christie’s mom, Eve (Lynda Day George) … hmmmm.

In any case, Josh’s body is missing and Christie and Greg go looking for him, but to no avail.   As the story unfolds, we soon learn that Hank’s son, Paul (Bill Paxton) is bat-shit crazy and has plans to marry Christie … a big ceremony and dead guests … not sure about the refreshments!!

Mortuary is a slick little thriller that has Bill Paxton chewing scenery and a nice jolt-of-a-twist ending.   Bonus features are limited to a video session with composer John Cacavas. 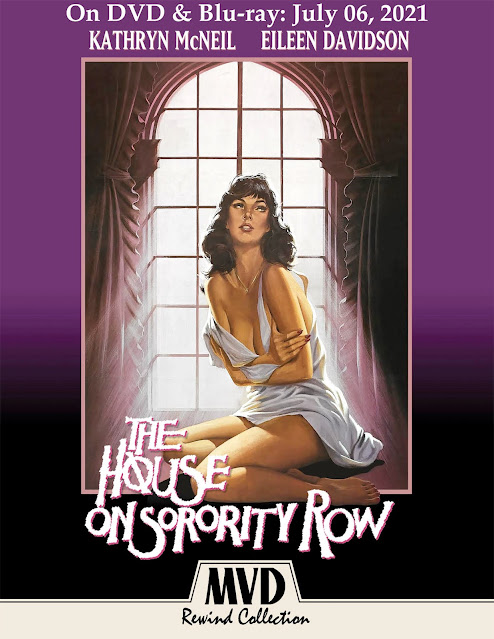 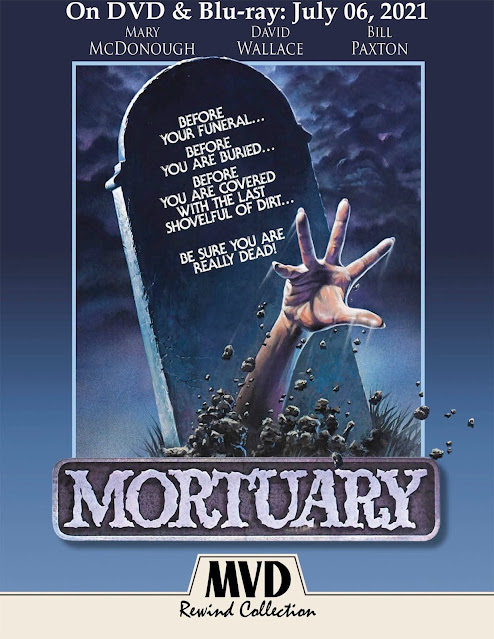 Email ThisBlogThis!Share to TwitterShare to FacebookShare to Pinterest
Labels: MVD Entertainment Group Bestows "Rewind Collection" Status On The House On Sorority Row And Mortuary For Release On July 06