Vinegar Syndrome Targets Apr. 27 As The Street Date For The Next Wave Of Film Restorations 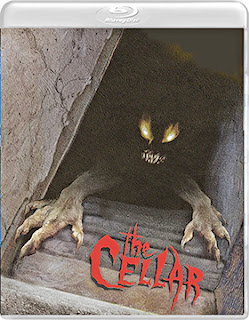 Vinegar Syndrome announced this past week that Apr. 27 will be the next street date for newly-prepared film restorations making their way to the Blu-ray marketplace.

For genre fans it is always a matter of taste, so what leads this mix of film restorations from Vinegar Syndrome is a subjective call.   With that said, we are going to go with director Kevin Tenney’s 1989 demonic horror tale, The Cellar.  A new 2K restoration from the 35mm original camera negative and the director’s personal 35mm lab print.

It’s the desert (Tucson doubling for West Texas), which can be a sinister place (sci-fi and horror films love the desert, especially for production considerations), and here we meet Mance and Emily Cashen (played by Patrick Kitpatrick — Remo Williams: The Adventure Begins, Death Warrant, Eraser, Last Man Standing, etc. … and Suzanne Savoy — as Patti Whittaker in The House of Cards series, plus such films as The Upside, Dare, Room, Into the Spider's Web) who arrived in this remote locale out of necessity … a job. 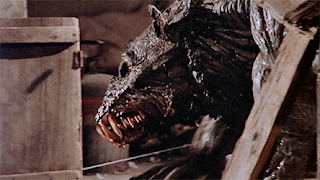 With the couple are their baby daughter, April (actually played by twin baby boys) and Mance’s son, Willy (Chris Miller — who made a career as a voice actor, Shrek, Madagascar, Monsters vs. Aliens, etc.), from a previous marriage.   The place they move into has a history, which soon comes front and center.

It seems that the house, through its basement, is connected to a series of caves wherein a creature dwells that was created for the sole purpose of dealing with the enemies of a local Comanche tribe years and years ago … an evil spirit that was cobbled together from various animals, both real and imagined.   It has now awakened … and it is hungry. 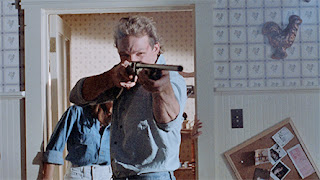 Willy discovers the “beast” early on, but no one believes him.  Soon the creature is killing people, driving poor dad nuts and it falls to Willy to rally the family in a final showdown before it is too late.

Bonus goodies for this creature-feature include commentary from director Kevin Tenney (Brain Dead, Night of the Demons, Witchboard, Endangered Species), who is joined by actors Patrick Kitpatrick and Suzanne Savoy, plus there is a newly-minted making-of documentary titled From Chicken Shit to Chicken Salad, Unearthing the Lost Cellar … and two viewing options, the original 1989 cut of the film and a never-before-seen “director’s cut.” 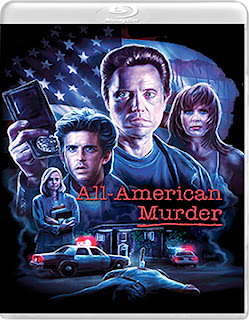 This is a 2K film restoration from the 35mm interpositive.

Of course, when you think of Anson Williams, you think of his years as Potsie Weber on the Happy Days series, but after it finished its ten-year run in 1984, Williams pretty much moved behind the camera.   With All-American Murder he delivers an odd genre flick … part mystery, part serial killer flick and part something else, it is hard to really button-hole this film.

Artie has been in and out of more colleges than you can shake a stick at, he likes to party and that usually gets him kicked out.   But this time, yes, this time, he is going to make a go of it at Fairfield College (OK State in Tulsa was the filming location) and get his degree, one that his father (Tim Green), a judge, has paid for many times over. 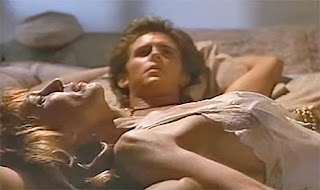 In no time he has a fling with the dean’s wife, Erica (played by none other than Joanna Cassidy), but quickly sets his sights on the hottest cheerleader on campus, Tally (Josie Bissett — perhaps best known as Jane from Melrose Place).  For someone who is supposed to be knuckling-down with his studies, Artie sure finds the time for the extra-curricular stuff.

The sexy Tally goes up in a ball of fire and is flung ablaze from the top of one of the campus buildings.   Enter — and this the best part of the movie — Detective P. J. Decker, played with gusto by Christopher Walken, who gets off zinger after zinger as he investigates Tally’s death … which points to, at every turn, to Artie.   He can’t catch a break … anyone who might help clear him also ends up dead!! 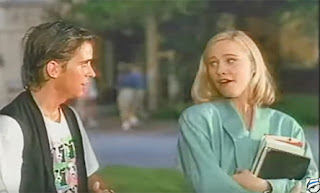 So, did he do it?   All-American Murder keeps you guessing … a few red herrings thrown in here and there to keep off of the scent.

Bonus features include team-commentary from podcasters, The Hysteria Continues!, plus a pair of production featurettes — “Being on a Team” and “A Valuable Experience.”

Email ThisBlogThis!Share to TwitterShare to FacebookShare to Pinterest
Labels: Vinegar Syndrome Targets Apr. 27 As The Street Date For The Next Wave Of Film Restorations