Breaking Glass Pictures Sets Stuck To Your Pillow For A Domestic DVD Debut On Apr. 30 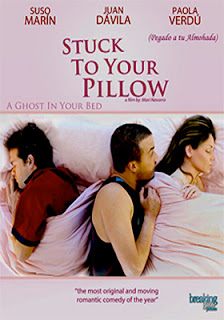 Madrid, Spain, picturesque, romantic and home to the love-sick Miguel (Suso Martín), a man who desperately loves a local beauty named Patricia (Paola Verdú).  That’s the location and the set-up for Spanish filmmaker Mari Navarro’s Stuck to Your Pillow, which will be arriving on DVD from Breaking Glass Pictures on Apr. 30.

There are just two little problems with this relationship.   First, the lovely Patricia is married, but when has that ever stood in the way of a love affair?   It complicates things, sure, but this is romantic Madrid, that little detail can be worked out.

Perhaps — and it is just a “perhaps” sort of thing — there might just be a little more of an obstacle to their relation than her being married … it seems that poor Miguel is not just love-struck, but he has literally just been struck dead in an auto accident!

That would be the end to most any relationship, but that wouldn’t make for much of a romantic comedy, which is what Navarro has delivered in equal parts — fun and romance!   Despite his guardian angel (Eduardo Tato) insisting that it’s time to go, Miguel embarks upon his quest — as a ghost — and soon discovers that he can profess his love for her in her dreams.   They can live, love and go on romantic adventures in her dream world.

To complicate matters even further, her husband (Juan Dávila) becomes convinced that his wife is having an affair.  Everything in her behavior of late points to that.   His solution is to hire two private investigators (incompetent, private investigators at that) — Socio (Rubén Torres) and Vigilante (Sepu Sepúlveda) — to ferret out the other man in the picture.   They arrive at the conclusion that it has to be a ghost!

So there you have it.  A woman having a love affair with a ghost, while her husband battles for her affections in the waking world.   It’s all great fun … and with a Spanish flair (with English subtitles).