Last Kind Words On DVD From Image Entertainment On May 21

Inspired by Geeshie Wiley’s spring of 1930 folk-blues recording, “Last Kind Word Blues,” which is filled with lyrical images of death, ghostly references and a love that transcends time (and perhaps even physical boundaries — that is left to the listener to decide and debate). 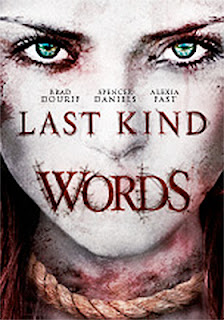 Wiley concludes her mournful tune with …

“The Mississippi river,
you know it's deep and wide
I can stand right here,
see my face from the other side

What you do to me baby
it never gets outta’ me
I may not see you
after I cross the deep blue sea.”

Now that the atmosphere for Last Kind Words has been set, we begin with Eli (Spencer Daniels — as Tyler in the Crash television series, plus such films as The Curious Case of Benjamin Button, Star Trek, etc.), a newbie to these rural parts of Kentucky where his father and mother have returned to work a farm.   It is familiar turf to them, but details are left a little vague on that subject.

Eli is a true, wide-eyed innocent, so it comes as quite the shock to him when a local beauty — a nearby neighbor — named Amanda (Alexia Fast — Jack Reacher) takes a fancy to him.   It seems as if she is playfully seducing him … and he is an easy conquest.

Also on the farm is a man named Waylon (another amazing performance by Brad Dourif), who sort of acts as the “Greek Chorus” as events unfold.  He gives the viewer clues as what is going on (quick with the folklore) and ominously warns Eli to steer clear of the spooky woods, which of course is a place he will need to explore.   Waylon has his share of secrets.

The alluring Amanda also sets boundaries, which at first seem silly, but quickly take on a deeper meaning when Eli goes where he has been warned not to go.   What he finds hanging in the woods would give anyone nightmares.

Last Kind Words is a near flawlessly delivered ghost story — Southern Gothic in its telling — that will have you ducking for cover and hiding your eyes as things literally go bump in the night!

The film worked the festival circuit, including the Atlanta Film Fest and the Brooklyn International Film Festival, to some nice reviews during 2012.  With the May 21 street date for the DVD, Image has three full months to beat the promotional drums for this one.

No word from Image Entertainment just yet as to bonus goodies that might be included on the DVD release.