Indican Pictures Says Apr. 30 For Blu-ray And DVD Editions Of The Man Who Shook The Hand Of Vicente Fernandez 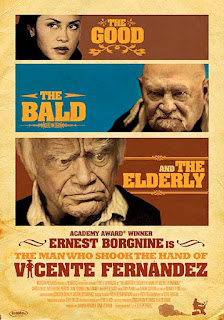 The ARR is 144 days and the box office take from the film’s limited theatrical showcase break this past December was $6,249.   That’s why we have DVD and Blu-ray … so that the other 300 million plus people in the country who weren’t in the right place — and at the right time — can enjoy this delightful film.

Ernest Borgnine was perfectly cast as the “old timer” Rex Page, a man with a fondness for Westerns (just imagine him as Dutch Engstrom, only fifty years older and in a care facility), who at 94 was as sharp and on his game as any thespian half his age.   He can be cranky, funny (what a great wit) … and rattlesnake mean when pushed too far!

What filmmaker Elia Petridis (How Henri Came to Stay) has concocted here is part send-up and part homage to the heyday of Spaghetti Westerns, with the nursing home that Rex finds himself in substituting nicely for any frontier town of the 1880s.

The place is run with an iron fist by a man named Walker (Barry Corbin), who like any Western villain has a henchman (played by Tony Plana, perhaps best known as Ignacio from the Ugly Betty television series) to do his bidding — who attempts to takes liberties with the beautiful Solena (Carla Ortiz) — and terrorize the other citizens too meek to stand up to him (actually, the other patients and staff members of the facility).

When the mainly Latino staff discovers that Rex once met Vicente Fernandez (famed Mexican actor, king of the Ranchera style of music and known as the “Sinatra of Mexico”), he becomes their hero.  He becomes someone they can rally behind, especially when Fernandez will be performing in concert at a local venue and the entire plans to attend ... but Walker has other plans for them. 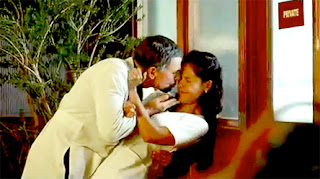 The stage is now set, metaphorically-speaking, for the big showdown.  The Man Shook the Hand of Vicente Fernandez is great fun and a nice sign-off for the legend … who left us on July 8 of 2012.