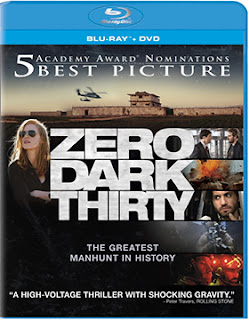 It looks as though director Kathryn Bigelow’s Best Picture nominee, Zero Dark Thirty, will be heading to the home entertainment market place on Mar. 19.

The ARR for Blu-ray/DVD Combo Pack and DVD editions (both SKUs featuring UltraViolet) works out to a lightning-quick 88 days … current box office, and still growing, is $83.6 million.

Sony Pictures Home Entertainment’s stellar publicity department seems to have taken time off for Mardi Gras and Valentine’s Day festivities this past week and in doing so has failed to issue any official press announcements (a one-page, poorly-designed, sell-sheet hardly qualifies).

In the meantime, every on-line retailer has posted the date (perhaps coming directly from Sony’s sales group … who are acting in their own best interest).   Based on this over-whelming evidence of retailer activity, Mar. 19 is the date we are going with.

In all fairness (and we do like to be fair to an organization that wouldn’t know what a screener for one of their major announcements was used for, even if they sat on it), this might just be part of an in-house stealth operation to keep the home entertainment news all hush-hush and below the radar so as not to discourage potential ticket buyers from heading over to their local multiplex on the run-up to the Oscar ceremonies on Sunday, Feb. 24.

That is the only logical explanation.   It would be inconceivable for any home entertainment group to actively suppress the sales and marketing of a high-profile Best Picture candidate at the height of the Oscar season (with all that free publicity), unless studio distribution brass have requested a slow-walk effort until after the Academy Awards to minimize theatrical exhibition blowback (there are millions of dollars at stake here). 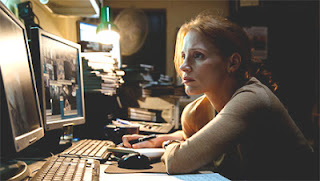 Zero Dark Thirty — with five Oscar nominations, including Best Picture, Best Original Script and Best Actress (Jessica Chastain) — could be the ultimate winner (although Argo appears to have a slight edge right now, with Silver Linings Playbook closing very fast … never count the Weinsteins out).
If Zero Dark Thirty does capture Oscar gold for Best Picture, it is well-deserved … and even if only half of the storyline is accurate (based on an original screenplay by Oscar-nominee Mark Boal — Oscar-winner for The Hurt Locker), it is both a small wonder that Osama was ever taken down (talk about your bureaucratic ineptitude) and a tribute to the professionalism of the SEAL team that took care of business.

On Sunday, Feb. 17, the WGA announced their winners, the results of which could signal a head-to-head duel for Argo and Zero Dark Thirty this next Sunday.   They were in separate categories — Original and Adapted — and they both took home WGA honors.

This double-win appears to set-up a hold-your-breath Oscar finale as neither director, Kathryn Bigelow or Ben Affleck, were nominated by the Academy for their work (so no clue will be forthcoming as to the Best Picture-winner when that Oscar is handed out in the Best Director category). 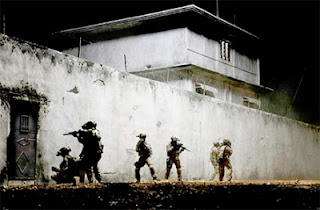 Tearing open that final envelope this year could yield a very big surprise!  This year’s selection of Best Picture candidates features some terrific films in competition … from blockbusters to dark horses.

It is a vintage year!  Right now there are at least six different films that still stand a chance of winning Best Picture laurels, especially if the votes cast among the Academy members are divided.

Based on retailer information, the Blu-ray/DVD Combo Pack includes four production featurettes as the only bonus nuggets — “No Small Feat - Making Zero Dark Thirty,” “The Compound,” “Targeting Jessica Chastain” and “Geared Up.”