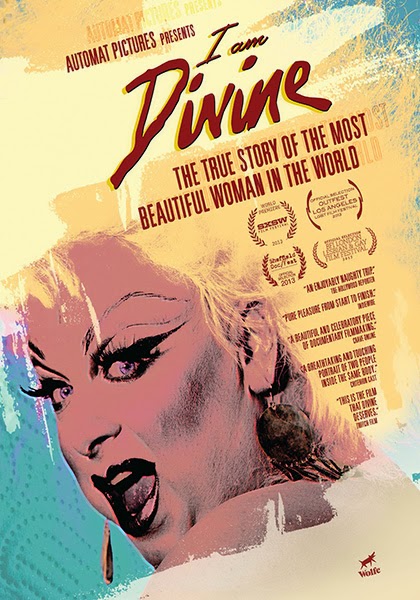 There are great movie stars and then there are screen legends.   Great actors and screen icons over time will become legends.

Such is the case of a screen great that I had the pleasure of meeting one evening.   It wasn’t just any evening, it was the Hollywood premiere of her latest film … and by any standard of measurement things went horribly wrong.

This screen icon is also the subject of Wolfe Video’s Apr. 8 DVD debut of documentary filmmaker Jeffrey Schwarz’s award-winning film, I Am Divine.

The ARR for this theatrically released feature-length documentary is 179 days and the box office tally from the film’s select-engagement run came in at $63,661.  The film continues to play here and there around the country … if it is your area be sure to check it out, otherwise you’ll have to wait until Apr. 8.

Bonus goodies include commentary from filmmaker Jeffrey Schwarz, who is joined by producer Lotti Phariss Knowles and Divine’s co-star in many of her film, Mink Stole.   There are also 30 minutes of deleted scenes. 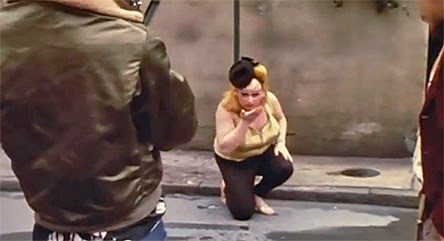 As the head of marketing for Metro-Goldwyn-Mayer’s home entertainment division I had the very good fortune of working with some of Hollywood’s greatest stars.   June Allyson, Ann Miller, Van Johnson, Debbie Reynolds, Gene Kelly, Cyd Charisse, Donald O’Conner, Esther Williams and even the legendary Bette Davis were counted among these great stars of MGM that I had the pleasure of meeting … and, on occasion, even dining with.

Hell, my young son even did some magic tricks for June Allyson and Ann Miller at dinner one evening while attending the VSDA Convention in Las Vegas … they had a good time as he put on his show, but he was totally clueless as to the star-status of his audience.

Before joining the studio I spent about a decade in the theatre business.  It was great fun, especially the art house side of it.   It was during this period that I had my first encounter with iconic screen legends.   Groucho Marx and Keir Dullea at the Crest in Westwood were memorable, but it was an eventful encounter one evening in 1974 with the legendary Divine that sticks with me most. 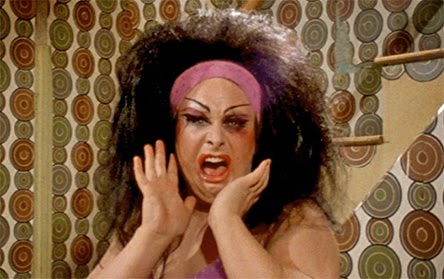 I was at that time the vice president of operations for a small SoCal theatre chain — about 30 screens as far north as Concord and all the way south to El Centro and Yuma.   The chain’s president would go on to become a film producer of some note with such films as The Howling, Lawnmower Man and Phantoms.

His partner had some interesting contacts in the entertainment business and he too would dabble with film production (of a somewhat different ilk — anyone remember Health Spa starring Abigail Clayton?).

Among these “interesting contacts” were business associates from the east coast who provided funding for our little enterprise through the concession business.  Their representative from back east was far more interested in other things (which shall go nameless here) than dealing with the day to day of supplying candy, popcorn and soft drinks to our chain of theatres, so I ended up managing that side of the business (it was in our best interest to make sure that things ran smoothly).

He also had some equally “interesting” contacts when it came to taking over certain theatres.   But that’s a whole other story … however, one such theatre that did come our way was the Las Palmas in Hollywood — between Hollywood Blvd. and Selma.

We closed it down, cleaned it up and did a little remodeling.   The day quickly came to reopen the place with the Hollywood premiere of Female Trouble, directed by the cult filmmaker John Waters and starring the great Divine.

Since the Las Palmas was destined to be the next Bleecker Street Cinema, it was decided that we’d rip a page from the playbook of the nearby Grauman's Chinese Theatre.   A four-by-four foot chunk of sidewalk in front of the theatre was jackhammered out and four inches of fresh concrete was poured (all without permits) late in the afternoon on the day of the film’s grand opening.

The plan was for Divine to place her hand and feet impressions in the fresh cement for future visitors to marvel at.   It was a good plan, but …

We got the necessary permit to have Las Palmas closed between Hollywood Blvd. on the north and Selma Avenue on the south.   We even had a Klieg light rolled up in front of the place and as the sun set it lit up the sky … a large crowd of curious onlookers began to gather.   Many more than anticipated!!!

At the appropriate moment a trash truck lumbered up Las Palmas and stopped in front of the theatre.   The hydraulics kicked in and the entire backend suddenly opened up to reveal eight Cycle Sluts — men dressed in leather, bustiers and fishnet costumes — who came pouring out and began dancing and prancing around the street.   The crowd went wild.   They would be the honor guard for Divine.

Next came the limo with our honored guest.  It pulled up in front of the theatre.  One of the motorcycle cops, who we were required to have there to provide security, opened the door to her limo and out she stepped, turned … and walked right through the fresh cement!

It was a disaster!   No feet or hand impressions, but a path of complete destruction leading to the open doors of the theatre.   I can, however, report that Divine was a good sport about it.

The premiere went well, but alas the Las Palmas didn’t become the next Bleecker Street and we soon closed it up.   Over the years it would become all sorts of things … eventually gutted and turned into different clubs.

I think it stands empty now, but there was a night in 1974 when the “magic” of Divine graced this aging picture palace … a night that I will never forget.

With the arrival of director Jeffrey Schwarz’s I Am Divine on DVD adoring fans — and even the curious — can once again celebrate the life and career of this icon; this legend of the silver screen!   Start counting the days!!!