Film Chest Tabs July 29 For Restored Martin And Lewis Comedy Hit ... At War With The Army 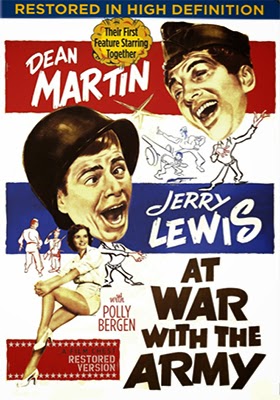 Hot on the heels of last week’s film restoration news from the Film Chest for the film noir classic, Detour (on DVD July 22), comes news of yet another film restoration that will be streeting as a priced-to-own DVD product offering on July 29.

Getting the royal treatment this time out is director Hal Walker’s 1949 (held up for theatrical release until the end of 1950 to clear the way for My Friend Irma Goes West) film adaptation of the James Allardice’s Broadway play, At War With The Army.

This musical comedy, teaming Dean Martin and Jerry Lewis (top-lining for the first time in what would be a run of 16 films featuring the comedy duo) also starred Polly Bergen, Mike Kellin and Jimmy Dundee.

Email ThisBlogThis!Share to TwitterShare to FacebookShare to Pinterest
Labels: DVD and Blu-ray Release Report, Film Chest Tabs July 29 For Restored Martin And Lewis Comedy Hit ... At War With The Army