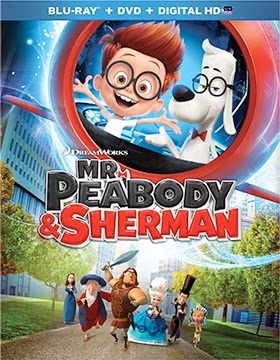 20th Century-Fox Home Entertainment has tabbed Oct. 14 for the release of multiple Blu-ray and DVD editions of the DreamWorks Animation production of Mr. Peabody & Sherman.

The ARR is a deliberate 221 days (a savvy move positioning the film after the summer doldrums for better sales and retail action during the run-up to Christmas) … ticket sales came in at $110.6 million.

Bonus features include a pair of featurettes — “Tour of the WABAC Machine” and “Time Travel: Mad Science.”  Exclusive to the Blu-ray viewing options are the original introduction to the Mr. Peabody and Sherman characters from the Rocky & Bullwinkle & Friends Show in 1959, the featurette titled “History’s Greatest Mysteries: A Dog and his Boy,” two interactive games — “Time Travel Memory Match Game” and “The WABAC Jigsaw Puzzle Game” — and more!