Midnight Releasing's Sanctuary: Quite A Conundrum Ready For DVD On Aug. 26 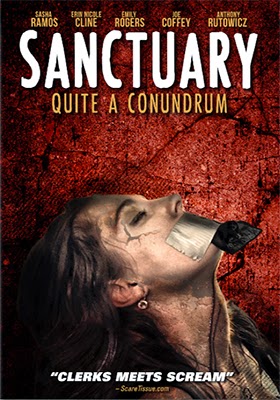 Writer/director Thomas L. Phillips has come up with one of the most original horror films in recent memory with Sanctuary: Quite A Conundrum.   Imagine a pendulum swinging wildly from comedy to horror (and beyond) and back again … an emotional joyride in the kinkiest sense that is blessed with some gut-busting dialog, quirky performances and more twists and turns than a garter snake on a hot stove.

After running the genre-based film festival circuit, piling up win after win, word arrived this week that Midnight Releasing will be bringing this little jewel to the DVD arena on Aug. 26.

Tabitha (Erin Cline) and Mimi (Sasha Ramos) throw a party!   With Mimi, who is smokin’ hot, you just sense that if she’s involved — party or no party — things will get properly weird in no time. 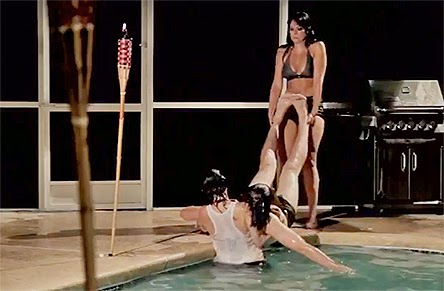 After she has a quickie with a pirate (well, not really a pirate, but just some middle-aged guy with an eye patch), some booze and a few words about “Jesus Bingo,” the pirate returns (naked) and blows his brains out (who’s gonna fish him out of the pool?).

Soon, his distraught wife shows up and is eventually tied to a chair (who did that?) and from that point on things start to get strange … and then stranger!  Sanctuary: Quite A Conundrum is quite the ride!

Email ThisBlogThis!Share to TwitterShare to FacebookShare to Pinterest
Labels: DVD and Blu-ray Release Report, Midnight Releasing's Sanctuary: Quite A Conundrum Ready For DVD On Aug. 26