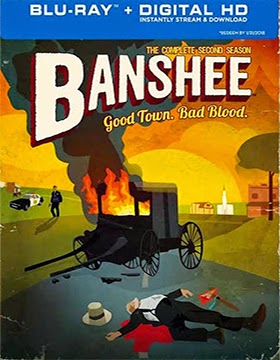 HBO Home Entertainment has one of the cleverest cable series lined up for delivery on both Blu-ray and DVD sets this coming Dec. 30 … just in time for some New Year’s holiday viewing (if you are otherwise not engaged in college bowl mania).

The series in question is Banshee: The Complete Second Season, starring Antony Starr as Lucas Hood, an ex-con who has assumed the identity of a dead lawman in a “tiger-by-the-tail” plot line that demands that he keep the deception going for both his personal survival and the well-being of the town’s people who have come to depend on him.   It is devilishly wicked in its twists and turns!!!

Banshee: The Complete Second Season arrives as both ten-episode DVD and Blu-ray collections spread over four-discs (the Blu-ray SKU features UltraViolet), with the featurette titled “Inside the Title Sequence: Uncover” and “Twitter” commentary with members of the cast and production crew as bonus goodies.

Exclusive to the Blu-ray SKU are the featurette, “Banshee Origins,” deleted scenes and episode commentary.